FansBet 20 No Deposit Free Spins On BerryBurst Slot - No Wagering!

William Hill Casino £10 No Deposit Bonus (As Seen On TV)

The standout game of the FA Cup 5th round comes at you from Stamford Bridge as Chelsea host Manchester UTD on Monday night. This post contains our Chelsea vs Manchester UTD betting preview with winning predictions, betting tips, probable line-ups, team news, enhanced odds, bookmakers offers and no deposit free bets on the FA Cup!

Get 35/1 Man UTD to beat Chelsea! Winnings paid as cash! Maximum bet £1.
Claim Here
Only for a limited time from 9am 18 February up until KO. Subject to availability. Regular welcome offer can be claimed in conjunction. Min deposit £10. Max bet £1. Full T&Cs apply. 18+. BeGambleAware.org

After being demolished 6-0 by Manchester City last weekend, Chelsea returned to winning ways in midweek when they faced Malmo (2-1) in the first leg of their Europa League tie. Prior to these two games, a 5-0 hammering of Huddersfield saw the Blues make the perfect return from a shocking 4-0 loss to Bournemouth. As to the FA Cup, Maurizio Sarri's men came through the previous rounds at home to Championship opposition, seeing off Nottingham Forest (2-0) and then Sheffield Wednesday (3-0). Looking at direct encounters, the Blues are undefeated in their last 10 home matches against Man Utd in all competitions.

Maurizio Sarri has only three injury concerns as Ruben Loftus-Cheek, Gary Cahill and Danny Drinkwater as all doubts. Hence, the Italian manager is expected to go wit a near full strength team, meaning that the likes of Eden Hazard and Gonzalo Higuain will lead the line. The remaining berth up front will go to either Pedro or William. In midfield, Ross Barkley will hope to keep his place in the team after scoring in Europa League, while N'Golo Kantè and Jorginho will retain their spot. No changes are expecting in defense, with Cesar Azpilicueta, Antonio Rudiger, David Luiz and Marcos Alonso protecting Kepa's goal.

Manchester UTD tasted defeat for the first time under new manager Ole Gunnar Solskjaer in midweek as they lost 2-0 to PSG. That result came after 11 unbeaten games on the trot, with 10 of the previous 11 outings ending in victory too. Prior to that, the Red Devils' last defeat was a 3-1 loss to Liverpool on December 16. Each of their 6 matches away from home since the management change has ended in victory, with a total of 15 goals being scored in the process. These two teams have met once in the Premier League this season, sharing 4 goals in a draw at Stamford Bridge back on the 20th October.

Ole Gunnar Solskjaer attacking options are somewhat depleted and changes are expected. Anthony Martial and Jesse Lingard will miss out through injury while Alexis Sanchez is a major doubt. As a result, Marcus Rashford and Romelu Lukaku are likely to lead the line, with Juan Mata playing in a number ten position. Nemanja Matic will anchor the midfield, flanked by Ander Herrera and Paul Pogba. In defense, Chris Smalling and Phil Jones will push to start as well as fringe players like Diogo Dalot, Sergio Romero, Fred and Andreas Pereira elsewhere. Matteo Darmian is a long-term absence.

Producing winning FA Cup predictions is no easy task? Throughout BetAndSkill.com you will find our best bets and match analysis that include over/under tips, first goalscorer tips, anytime goalscorer tips, BTTS tips. Anyway, we have selected the best four recommended bets on Chelsea vs Manchester UTD! You can combine our recommended bets to build your Betfair Same Multi accumulator. New to betting? We’ve produced a full betting glossary to look up any uncertain terms…


Are you an acca backer? Take a look at our free accumulator tips for the weekend!

Why not check out some of our best no deposit free bets or betting offers and combine them with an accumulator bet and get your journey started today?! 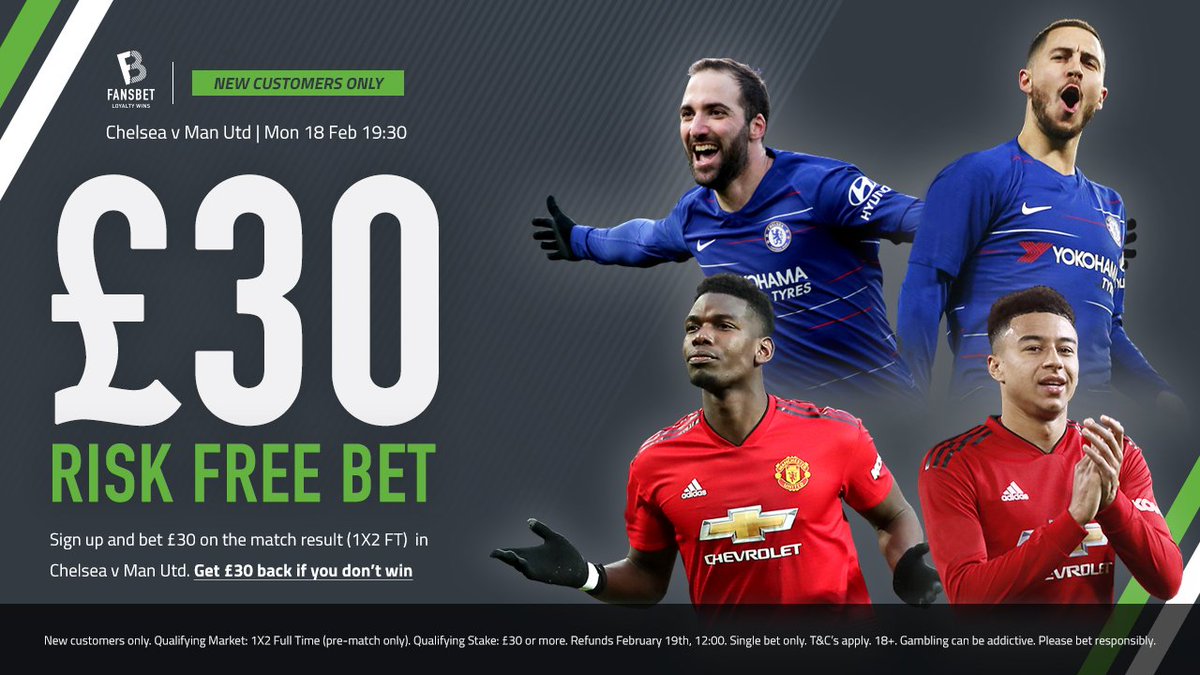 The following are the best free bets selected for you by the BetAndSkill team. Choose your favourite offer, click the 'Claim' button and enjoy your betting bonus in few simple steps!
T&Cs apply. 18+. Gamble responsibly.

Find below the latest free bets launched by our trusted UK betting sited and European bookmakers. Get also exclusive welcome offers by entering our special bonus codes:
T&Cs apply. 18+. begambleaware.org.
SHARE IT WITH YOUR FRIENDS
Let your friends know about this article! Share it on your favourite social media!

Please tell us what you think about
"Chelsea vs Man UTD FA Cup 5th Round Betting Tips, Lineups & Odds (February 18, 2019)"

New Customers only. Deposit and place a £5 qualifying bet at odds of 2.00 or greater within 7 days of opening a new account; excludes cashed out bets. Receive 2x £10 Free Sports Bets, valid on set events only at odds 2.00 or greater, expires in 7 days, plus a £10 Casino Bonus, expires in 7 days. Wager the Casino Bonus 35x to withdraw winnings. Credit/Debit card deposits only. Geographical Restrictions and T&Cs Apply. Please Gamble Responsibly
Claim Here

New Customers only; Min. deposit £15 (no Skrill/Neteller); Use bonus code SCORE10; Bonus amount is 100% of deposit up to £50; Offer can be claimed once per household; Wager the qualifying deposit and bonus amount 5x within 30 days to convert bonus winnings into real money; Wagers must be on min. odds of 4/5 on singles or acca bets with min. odds of 2/5 per selection to qualify; Max. stake contribution to wagering requirement is the value of your bonus; Certain bet types are excluded; See full terms; Terms apply; 18+
Claim Here