This article contains our English FA Cup predictions & betting tips for every knockout round, fired off by our team of experts. FA Cup accumulators and recommended bets are generally posted on Thursday/Friday before a Saturday schedule of fixtures.

Find below our recommended bets to bash the bookies this week.

We suggest you to bet on singles on the selected bookmakers (we can assure they are offering the highest odds at time of writing). You can combine our recommended bets to build your FA Cup accumulator or copy our acca by continue scrolling this page.

Follow us on Twitter to get notifications of when our tips are posted so you never miss a winning prediction! 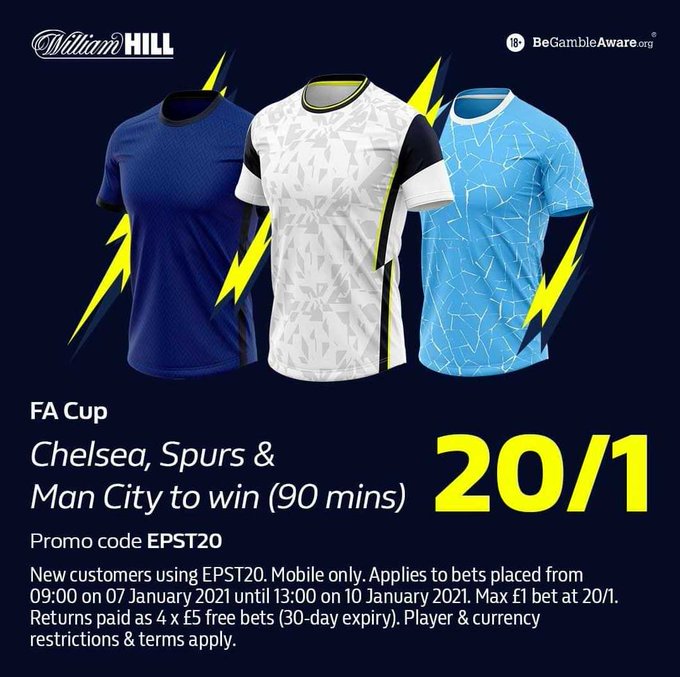 The following is our recommended accumulator on this week's fixtures.. Copy and win!

What is the FA Cup

The FA Cup is England's longest and proudest competition. It was first played during the 1871–72 season, and as a result it is the oldest association football competition in the world. The FA Cup is a knockout tournament and involves all of the teams currently playing in all 4 divisions of the English Football League (Premier League, Championship, League One, League Two), along a host of non-league clubs. FA Cup winners automatically qualify for the first round of the Europa League. Traditionally the FA Cup Final always takes place in May and is held at Wembley Stadium. Arsenal are the most successful club in the FA Cup history, winning a total of 13 FA Cup competitions.

It is very hard to predict as Premier League teams often opt to rest their best players for the top flight, while Championship, League One and League Two clubs go full force to get visibility and TV coverage. It’s the competition where anything can happen. Giant killings are very frequent but our tipsters are good enough to avoid this kind of upsets and even correctly predict a correct score or two.

BetAndSkill tipsters bring you our FA Cup predictions a few days before each round to make sure you receive the most up-to-date odds. We cover the competition from the First Round Proper right through to the final. Suggested Emirates FA Cup odds come from across very reliable bookmakers on the web. We also combine our betting tips with our favourite free bets, enhanced odds and promotions, so you can make the most of your FA Cup betting.

Every time there is a cup round all the football experts turn their attention to the English top-flight. We collate all the top Premier League pundits predictions and we are challenging the likes of Mark Lawrenson, Robbie Savage, Michael Owen and many more.

We also publish match previews in our football predictions section, starting from third round through the FA Cup final.

Where to watch the FA Cup today

These streaming services provide added value to the competitions as they enable millions of people to watch FA Cup matches that they might not otherwise have been able to see.

Here are BetAndSkill our team of expert tipsters are throughly researching info and stats about all the football matches to provide you with winning football tips every day. We have a wide range of daily betting tips and match previews:

The FA Cup always provides excitement, as people chance their arm and take a punt on the butchers, bakers and candlestick makers to beat the multi-millionaire superstars.

Every year is no different and the Third Round has the opportunity for plenty of shocks on the cards.

But what are the biggest shocks in the Third Round history? Take a look at the biggest upsets and giant-killers of the competition!

In recent years the FA Cup has been dominated by the big four sides. The current champions are Arsenal after they defeated Chelsea 2-1 in last season's final.

Man City, Arsenal and Manchester United have also been recent champions, with the last decade of winners found below: