Manchester UTD will attempt to bounce back from back-to-back defeats when they welcome West Ham to Old Trafford in the quarter-finals of the FA Cup this weekend. This article contains MANCHESTER UTD v WEST HAM betting preview with predictions, betting tips, probable lineups, enhanced odds, exclusive promotions & no deposit free bets on the match!

After a run of four consecutive wins, United have lost the last two games, to West Bromwich Albion and last Thursday when the Red Devils suffered an emphatic 2-0 loss to Liverpool in the first leg of their Europa League last-16 clash. The FA Cup looks like being Louis van Gaal’s last chance of winning silverware with United.  They edged past League One side Sheffield United in Round 3 with a narrow a 1-0 win. They beat Derby in the fourth round (3-1) and in the last 16 they won 3-0 at minnows Shrewsbury.

Juan Mata is banned after being sent off in Manchester United’s defeat to West Brom. Marouane Fellaini and Bastian Schweinsteiger both returned to action against Liverpool and could feature again although Michael Carrick is also in contention. Wayne Rooney, Luke Shaw and Ashley Young are the Red Devils’ long-term absentees.

West Ham have won each of their last four consecutive matches in all competitions. Their 2-3 come from behind win at Everton last weekend moved them two points ahead of United in the league table and only one point off fourth placed Manchester City. They have won 10 of their last 15 games in all competitions (D3, L2) and arrived at this stage of the FA Cup with a thumping 5-1 win at Championship side Blackburn. In the earlier rounds West Ham made it past Liverpool at the second attempt, drawing 0-0 at Anfield and winning the replay 2-1 in extra time on their own turf. In the third round they edged out Wolves of the Championship with a 1-0 win at Upton Park.

Slaven Billic will still be without James Collins and James Tomkins at the back, while Sam Byram is also ineligible to play. Enner Valencia, Victor Moses and Joey O’Brien are available for the Hammers again after shaking off their respective injuries. Darren Randolph will return between the sticks while Emmanuel Emenike could start up front.

This is a fixture in which the Man UTD have historically done well, winning eight of the last nine home meetings in all competitions, with the last defeat coming in May 2007.
Anyway, the Hammers held United to a 0-0 draw at Old Trafford when the clubs last met in December. 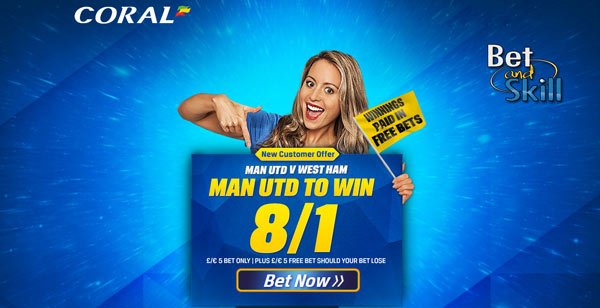