Manchester UTD have already made the EFL Cup final despite they were beaten by Hull City 2-1 in the semifinal 2nd leg match in midweek and they would love to progress as far as they can also in this competition. Prior to Thursday's match, Man UTD was on a 17-match unbeaten run in all competitions as the last time they tasted defeat was in a Europa League match against Fenerbahce in November. As to the FA Cup, they brushed past Reading in the last round with a 4-0 home victory

Jose Mourinho has a fully-fit squad at his disposal, and he is expected to make changes from Thursday's line-up. Sergio Romero is set to start in goal while Luke Shaw should start as left back and the youngster Axel Tuanzebe at the heart of the defense. Marcus Rashford is expected to lead the line with Wayne Rooney, Juan Mata and Anthony Martial filling the three offensive midfield roles.

Wigan currently sit 21st in the Championship standings despite replacing the popular Gary Caldwell with former Manchester United reserve manager Warren Joyce. Anyway, back-to-back wins have lifted them out of the bottom three on goal difference. The Latics are the lowest scorers in the second tier with 24 in their 27 outings so far. Furthermore, they have not managed to find the net in their last seven visits to Old Trafford.

The visitors will be without former Man United trio Nick Powell, Andy Kellet and Reece James while Ryan Tunnicliffe is fit and free to play against his former club. Alex Gilbey could also return after a long injury layoff.  Will Grigg will sperhead the attack in a 4-1-4-1 starting formation. 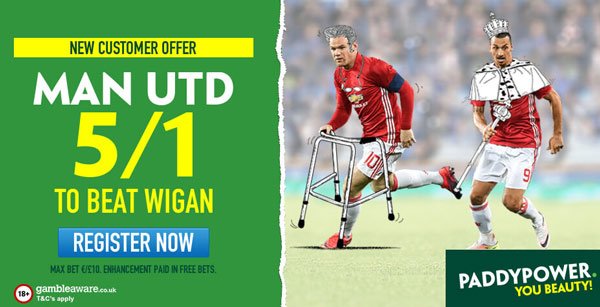 You can watch and bet on MANCHESTER UTD v WIGAN live at bet365.com