FansBet 20 No Deposit Free Spins On BerryBurst Slot - No Wagering!

William Hill Casino £10 No Deposit Bonus (As Seen On TV)

Crystal Palace recently won four matches on the spin - against Middlesbrough, West Brom, Watford and Chelsea - before to lose to Southampton 3-1 at St. Mary's in midweek. Anyway, they are still only three points above the relegation zone.  Sam Allardyce men have two games in hand on the two clubs - Hull and Swansea - immediately below them, but their run-in looks extremely tough with away trips to Liverpool, Manchester Ctiy, and Manchester United to come. The Eagles have won only one of their 15 Premier League games against Arsenal (D3 L11) and are winless in 12 against them.

Sam Allardyce has revealed that Yohan Cabaye will likely miss the match and is hopeful that James McArthur will be available again following a back problem. Anyway, Mathieu Flamini and Luka Milivojevic should deputise in midfield, with Joe Ledley main alternative. With James Tomkins and Scott Dann ruled out, Martin Kelly may keep his place and partner Damien Delaney at the hearth of the defense. Jeffrey Schlupp should also be safe to keep his spot at left-back with Patrick van Aanholt unlikely to recover from an ankle injury in time. The likes of Jason Puncheon, Andros Townsend and Wilfried Zaha will support central striker Christian Benteke in attack. Pape Souare and Connor Wickham remain sidelined, while Fraizer Campbell is still doubtful.

Arsenal’s 3-0 victory over a struggling West Ham team in midweek would have eased some pressure on Arsene Wenger. The Gunners are 6th in the Premier League standings and can't afford any more slip ups in a bid to regain a place in the top 4. Prior to the visit of the Hammers Wenger's men had won just one of their previous six league outings and suffered embarrassing defeats to both Watford and West Brom.  They have taken just four points from the last seven away from home. Furthermore, Arsenal have conceded at least 3 goals in their last 3 away matches. 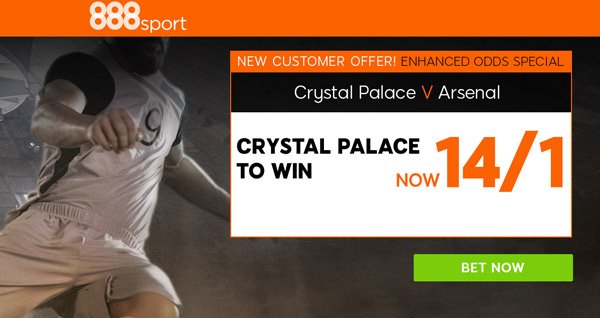 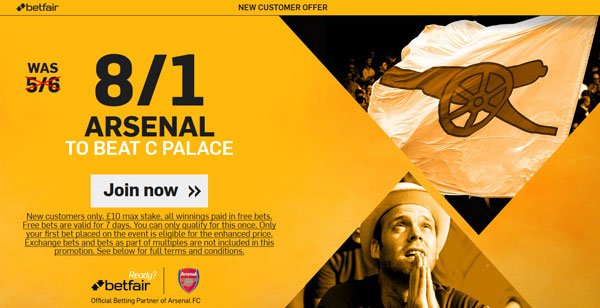 The following are the best free bets selected for you by the BetAndSkill team. Choose your favourite offer, click the 'Claim' button and enjoy your betting bonus in few simple steps!
T&Cs apply. 18+. Gamble responsibly.

20/1 Liverpool to score vs Wolves

New Customers only. Deposit and place a £5 qualifying bet at odds of 2.00 or greater within 7 days of opening a new account; excludes cashed out bets. Receive 2x £10 Free Sports Bets, valid on set events only at odds 2.00 or greater, expires in 7 days, plus a £10 Casino Bonus, expires in 7 days. Wager the Casino Bonus 35x to withdraw winnings. Credit/Debit card deposits only. Geographical Restrictions and T&Cs Apply. Please Gamble Responsibly
Claim Here

New Customers only; Min. deposit £15 (no Skrill/Neteller); Use bonus code SCORE10; Bonus amount is 100% of deposit up to £50; Offer can be claimed once per household; Wager the qualifying deposit and bonus amount 5x within 30 days to convert bonus winnings into real money; Wagers must be on min. odds of 4/5 on singles or acca bets with min. odds of 2/5 per selection to qualify; Max. stake contribution to wagering requirement is the value of your bonus; Certain bet types are excluded; See full terms; Terms apply; 18+
Claim Here