Premier League Champions Chelsea host Watford on Monday Night in what will be the penultimate fixture for both sides. Check out here our Chelsea v Watford betting preview with predictions, betting tips, probable line-ups, team news, boosted odds, bookmakers promotions and no deposit free bets on the final Premier League matches of the season!

The 1-0 victory over West Brom on Friday night means Chelsea have secured their second Premier League title in three seasons. They have won five matches in a row since the 2-0 reverse at Manchester UTD and  kept a clean sheet in each of their last three games. Since that 3-0 humbling at Arsenal last September they have been pretty much ruthless, winning 25 of their last 30 Premier League games. The Blues will take on Arsenal in the FA Cup Final at the end of the month, looking to win a sensational domestic double.

John Terry is likely to make his final appearance at Stamford Bridge, as Antonio Conte is expected to change the three man backline, also inserting Nathan Ake and Kurt Zouma in defense. N'Golo Kante was only fit enough for the bench against the Baggies but will push for a return to the starting XI, probably replacing Nemanja Matic in the middle of the park. Up front, Michy Batshuayi could be rewarded for scoring the title-clinching winner with his first Premier League start. Eden Hazard and Willian should complete the attack.

Watford have lost four successive matches without scoring a goal and they have not scored a goal away from home since January. They have now lost 6 on the bounce on their travels. The Hornets escaped from relegation last week, thanks to an unlikely home defeat of Hull City against the already relegated Sunderland. Watford’s last visit to Stamford Bridge saw them manage a 2-2 draw. Chelsea ran out 2-1 winners when they visited Watford earlier this season. That result extended Watford's winless run over Chelsea to 11 games in all competitions, 8 defeats and 3 draws.

Watford are facing a defensive injury crisis after Christian Kabasele injured his hamstring in Friday's defeat at Everton. He joins Miguel Britos, Craig Cathcart and Younes Kaboul on the sidelines. Tom Cleverley will return to the starting XI after he was ineligible to face parent team at the weekend. Up front, M'Baye Niang and Troy Deeney will spearhead the attack, with Nordin Amrabat out wide and Stefano Okaka provinding a further option. 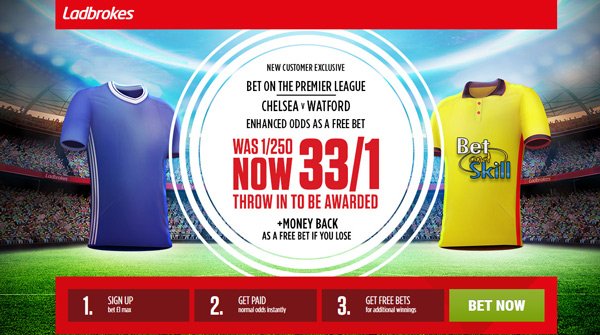