Conor McGregor will fight Chad Mendes at UFC 189 after featherweight champion Jose Aldo withdrew due to a rib injury. Who will win the fight and the interim featherweight title at the MGM Arena in Las Vegas on July 11? Don't miss our betting preview on Mendes v McGregor fight with tips, best odds, free bets and no deposit bonuses!

Chad Mendes will relish the chance to get in the ring and a step closer to another chance at Aldo, the man who's inflicted the 30-year-old's only two professional losses. He suffered his first defeat to Aldo at UFC 142 via a controversial finish at 4mins 59 seconds in the 1st round. The Brazilian held the Octagon fence to avoid a takedown before kneeing Mendes in the head to end the fight. The rematch took place in October last year, at UFC 179, when Jose Aldo won a close unananimous decision.

Mendes, a former NCAA All American wrestler at Cal Poly, last fought in April, defeating Ricardo Lamas via first-round TKO. He would unquestionably represent the best wrestler McGregor has ever faced. 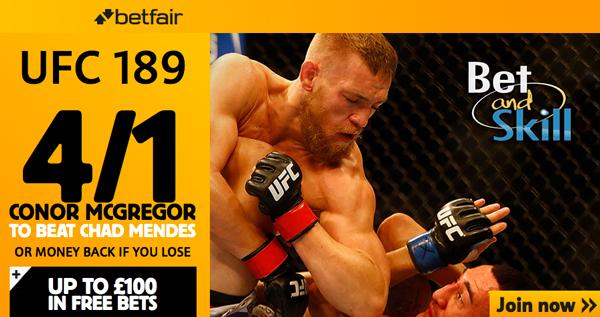 Fighting out of Dublin, Conor McGregor also is unbeaten in the UFC with a 5-0 record inside the Octagon. The former Cage Warriors featherweight and lightweight champion enjoyed a spectacular debut as he tore through Marcus Brimage in just 67 seconds. Then the likes of Urijah Faber, Chad Mendes, Frankie Edgar and Kenny Florian have all been dispatched by the Irish fighter, who has finished his past three fights via knockout.

McGregor is a precision striker with big power in his hands and feet. The countering ability of the Irishman is tremendous. He uses his straight left and uppercuts to effectively punish acts of aggression by his opponent. One issue with him is that he usually does not respect the power of his opponents but he has shown an excellent chin and this issue has not come back to haunt him in any of his fights. His takedown defense has improved significantly over the years and he has recently earned a brown belt in BJJ under the legendary John Kavanagh.

McGregor had predicted a knockout of the Brazilian champion in four minutes of the first round. He said Chad Mendes is pretty similar to Jose Aldo and believes he will also finish him four minutes into the first round and it will only take that long because he is going to toy with him first.