Georges St-Pierre makes his highly anticipated return to the Octagon this Saturday at UFC 217 at the Madison Square Garden in New York City when he meets middleweight champion Michael Bisping. Who will win? Read here our Michael Bisping vs Georges St-Pierre betting preview, including free picks, best odds, bookie offers and no deposit free bets on the fight!

Michael Bisping shocked the world one year ago when he knocked out Luke Rockhold on two weeks’ notice to become the first British fighter to win a UFC title. The champ enter this fight on the back of a five wins in a row, a streak that that has seen him defeat former middleweight champions Anderson Silva and Luke Rockhold before defending his belt in a grudge rematch against Dan Henderson, a man who brutally knocked him out at UFC 100 but went into the title fight at UFC 204 having gone 3-6 in his previous nine fights.

Bisping has proven over the years that he has excellent takedown defence while in the stand-up game he is one of the finest technical fighters. Plus, he is expected to weigh in about 20 pounds heavier than St-Pierre - a massive size differential.  He throws just about 4.5 strikes per minute on average, but does so with some abysmal accuracy. His two inch height advantage might make it a little easier for him to find his target.

Georges St-Pierre, who has only lost two of his 27 career fights, returns to the octagon after a four-year layoff as he has not fought since UFC 167 when he beat Johny Hendricks by split decision. It was his ninth straight title defense in the welterweight division. St-Pierre's two career losses have both come in title fights. The 36-year-old Montreal native suffered a stunning first-round loss by submission to Matt Hughes in his first bid for the UFC welterweight belt at UFC 50, and saw his first reign as UFC welterweight champion quickly ended at UFC 69 with a first-round TKO loss to Matt Serra. Now, he is moving up to 185 pounds from 170 and this could be a huge handicap. Given St-Pierre’s insane work ethic, resources and obsessive nature, it's likely he is coming into this contest in serviceable, battle-ready condition.


St-Pierre has never been a big striker. He just controlled fights. Only two of his title defenses ended in knockouts. Furthermore, GSP has had a torn ACL and an eye injury during the time he has been out. Anyway, the Canadian was a dominant wrestler, and on the feet he has one of the most all-round skill sets the sport has ever seen. But it can be difficult to forecast what style or state the former welterweight champ will return in. If St-Pierre can secure any take downs, the battle of strength and size between these two will be interesting, but Bisping is the bigger man and won’t be easy to get to the ground. Something to not underestimate given that GSP was the bigger man in almost every fight of his welterweight career. 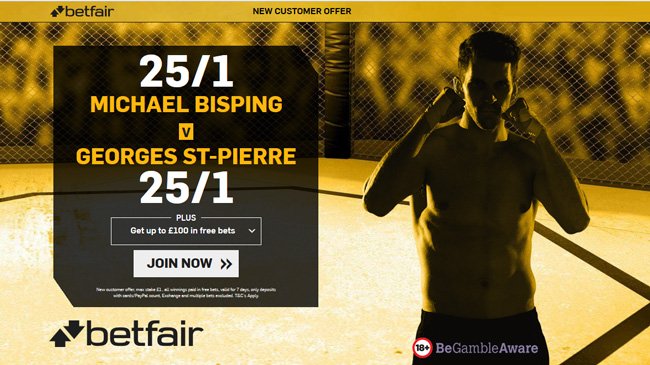