Arsenal and Leicester return to Premier League action on Wednesday night with the Gunners buoyed by reaching the FA Cup at the weekend. This article contains our Arsenal v Leicester betting preview with predictions, betting tips, starting lineups, team news, enhanced odds, bookie bonuses and no deposit free bets on this clash!

Arsenal booked their place in the FA Cup final by defeating Manchester City after extra time on Sunday. They also ended a four-game losing run on their travels when they grinded out a 2-1 victory at Middlesbrough last Monday night, but they still sit 7th in the top-flight standings, but they have games in hand on all the teams above them including three on third placed Liverpool who are nine points better off. The Gunners are unbeaten in their last 11 games against Leicester City, winning seven of them

Shkodran Mustafi looks set to miss the home meeting with Leicester City, while Alex Oxlade-Chamberlain will be assessed after suffering a kick to the foot last time out. Hector Bellerin is likely to earn a recall to the starting XI after dropping to the bench in recent matches while Kieran Gibbs could also replace Nacho Monreal on the other flank. Grant Xhaka and Aaron Ramsey may keep their places in central midfield. Mesut Ozil and Alexis Sanchez appear certain starters in the attacking midfield positions. with Danny Welbeck the alternative to Olivier Giroud as the lone striker. David Ospina and Lucas Perez remain out, while Santi Cazorla will miss the rest of the season.

Leicester also put in a resolute display when drawing 1-1 at home to Atletico Madrid last week, but sadly that was not good enough following a 1-0 first-leg loss at the Vicente Calderon. The Foxes have won five of their last seven league matches but are winless in their last two. The reigning champions have struggled all season to collect points on the road and still have only a solitary away league victory to their credit, which came at West Ham last month. They have 37 points, six more than third bottom Swansea and two games in hand.

Wes Morgan is set to miss the trip to Arsenal after being forced off during Tuesday's 1-1 draw against Atletico Madrid in the UEFA Champions League with a hamstring problem. Islam Slimani has been ruled out with a groin injury, while Nampalys Mendy will miss the remainder of the season after undergoing ankle surgery. The likes of Riyad Mahrez, Danny Drinkwater, Wilfred Ndidi and Marc Albrighton should all start in midfield, with Shinji Okazaki occupying the support striker role behind Jamie Vardy up front. Ahmed Musa, Andy King and Demarai Gray could all feature if Craig Shakespeare looks to rotate. 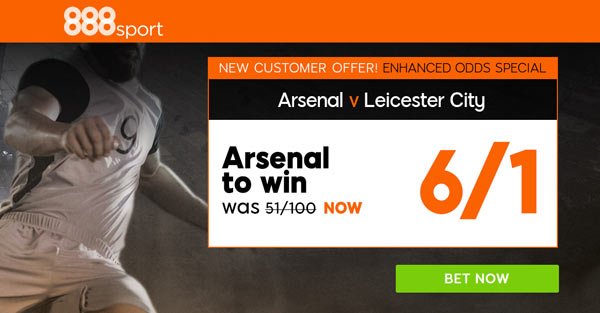