Tottenham host Manchester United in a blockbuster Premier League clash on Wednesday night. Will Spurs give their top-four bid a shot in the arm with a huge home win? Check out here our Tottenham vs Manchester UTD betting preview with predictions, betting tips, lineups, team news, odds, bookmakers promotions and no deposit free bets on this clash!

Ladbrokes offer 28/1 ANY team to win a corner in Spurs vs Man UTD! Hurry up!
T&Cs apply, 18+ begambleaware.org
Claim Here

Tottenham are on an eight-match unbeaten run and sit fifth in the table, 8 points behind 2nd placed Manchester UTD . After a difficult start, Spurs have won seven of their last 11 fixtures at Wembley Stadium. Anyway, Mauricio Pochettino's men have taken just three points from their five matches against Top 6 clubs in Premier League this season - they thumped Liverpool at Wembley and recorded a home loss to Chelsea and away defeats to Man City, Arsenal and Man UTD. Furthermore, they enter this match on the back of 2 disappointing 1-1 draws at Southampton and League Two Newport County in the FA Cup. Spurs are unbeaten in their last five home games against the Red Devils, a streak that includes victories in this fixture in each of the past two seasons, most recently running out 2-1 winners at White Hart Lane last term.

Hugo Lloris and Christian Eriksen are both fit following illness, and should feature from the off. The Dane will form a trio of offensive midfielders alongsde Son Heung Min and Dele Alli, while Harry Kane will retain his berth as central forward. In defense, Serge Aurier is struggling with a calf problem and will be replaced by Kieran Trippier, with Ben Davies keeping his place at left-back, Jan vertonghen and Davinson Sanchez forming the central pair. Mousa Dembele remains the favourite to partner Eric Dier at the base of midfield, with Victor Wanyama and Moussa Sissoko providing alternatives. Harry Winks remains sidelined while Toby Alderweireld and Erik Lamela are unlikely to feature although they have both returned to training.

Man United cruised to a 4-0 win at Yeovil Town in FA Cup last weekend, meaning they have now won their last five competitive matches and are unbeaten in eight. The Red Devils are currently runner up to Man City in the Premier League, but have cut the distance to 12 points. They have won three straight Premier League matches without conceding a goal and boast the best defensive record of the league. United's record against fellow top-six teams has been mixed so far this season with two wins, two defeats and a draw. Anyway, Jose Mourinho's men beat the Lilywhites 1-0 earlier this season in a tight game decided by substitute Anthony Martial’s late finish.

Jose Mourinho has no fresh injury concerns ahead of this clash and looks set to name his strongest XI. New signing Alexis Sanchez is expected to make his Premier league debut with the Red Devils, supporting the lone striker alongside Jesse Lingard and Anthony Martial. The likes of Paul Pogba and Nemanja Matic should anchor the midfield while Antonio Valencia, Phil Jones, Chris Smalling and Ashley Young, along with David de Gea, were all rested on Friday and look set to return in defense. Eric Bailly, Zlatan Ibrahimovic and Daley Blind remain out through injury.

£25 free for every goal scored!

We have found the best betting odds on the Tottenham vs Manchester UTD match winner market (subject to fluctuations):

BetAndSkill's tipsters have selected 5 recommended bets on Tottenham vs Manchester UTD. Copy our betting tips below and spread the word: 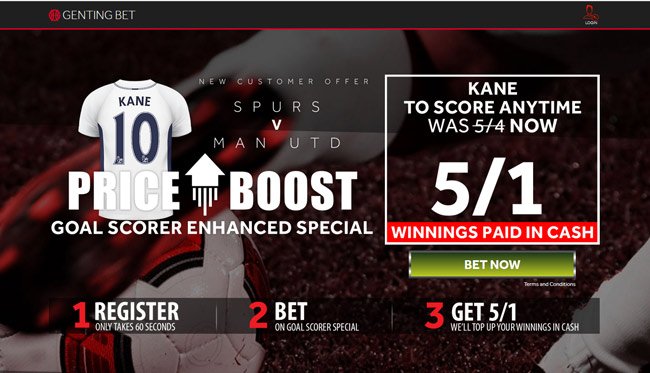