Tottenham and Arsenal go head to head in a most anticipated North London Derby at White Hart Lane. Will the Spurs keep the pressure on Chelsea by making it nine Premier League wins in a row on Sunday? This article contains our Tottenham v Arsenal betting preview with predictions, betting tips, probable lineups, team news, best odds, bookie free bets and no deposit bonuses on the Premier League!

Tottenham were made to work hard for an eighth straight Premier League victory when winning 1-0 at Crystal Palace on Wednesday night. They are still battling it out for the Premier League title as the gap between them and Chelsea has been restored to four points, with five games to go. Spurs are unbeaten at White Hart Lane this season in all competitions and they have dropped points on only two occasions, winning 15 and drawing two of them. Furthermore, Tottenham are also unbeaten in each of their last five league encounters with Arsenal (W1 D4). Both teams have scored in the last six North London derbies.

Mousa Dembele picked up an ankle injury last time out and will be assessed ahead of this clash. Mauricio Pochettino may be forced into playing a 4-2-3-1 formation, with Eric Dier and Victor Wanyama combining in central midfield. Up front, Harry Kane will be supported by Dele Alli, Christian Eriksen and Son Heung-min.  In defense, Danny Rose hasn't featured since the 0-0 draw with Sunderland back in January, but could return to the squad and make the bench. Ben Davies may keep his starting spot at either left-back or left wing-back. Kyle Walker should get the nod over Kieran Trippier on the opposite flank. Erik Lamela and Harry Winks are out for the season and the only other current injury doubts are Michel Vorm and Cameron Carter-Vickers.

Arsenal also enjoyed a pivotal win in midweek, but they needed 86 minutes and a large slice of luck to break down Leicester City 1-0, meaning that they have won their last three competitive fixtures, including their success over Manchester City in the semi-finals of the FA Cup on Sunday. Despite a disappointing season, the Gunners still find themselves well and truly in the hunt for a top four finish and into the final of the FA Cup where they will play Chelsea next month. Anyway, Arsenal come into this derby as underdogs as they have won just two of their last nine away Premier League games.

Laurent Koscielny is the main injury concern for Arsene Wenger ahead of the north London derby. The Frenchman could switch his XI up for Sunday's north London derby, with Rob Holding, Aaron Ramsey and Alex Oxlade Chamberlain expected to return to the side. Nacho Monreal appears a likely starter at either left wing-back or left-back while Alex Oxlade-Chamberlain and Hector Bellerin are in contention dor the starting berth on the opposite flank.  Granit Xhaka and Aaron Ramsey appear the likely central midfield partnership, with Francis Coquelin and Mohamed Elneny the other options. Danny Welbeck should leas the line, with Mesut Ozil and Alexis Sanchez as offensive midfielders. Theo Walcott and Olivier Giroud are the main alternatives upfront. Mathieu Debuchy, Lucas Perez, Santi Cazorla and David Ospina will definitely miss out. 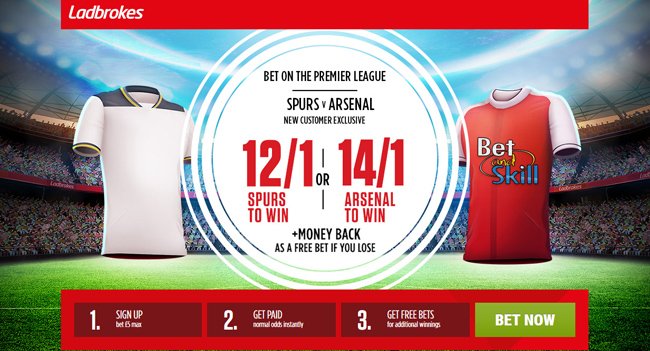