Previously known as the Brit Insurance Novices Hurdle this race was introduced to the festival in 2005 and is a three mile hurdle race for novices. The AB Novices Hurdle is open to 4 year old and older novice hurdlers. Monkfish edged home at 5/1 last year but the previous six renewals have all been won by horses going off at double-figure odds (including a 50/1 shot). Read below a complete Cheltenham 2021 Albert Bartlett Novices Hurdle race preview, with free predictions, free bets, no deposit bonuses, odds, recent trends and special promotions.

Are you looking for all the 2021 Cheltenham predictions? Visit our Cheltenham betting tips section here! 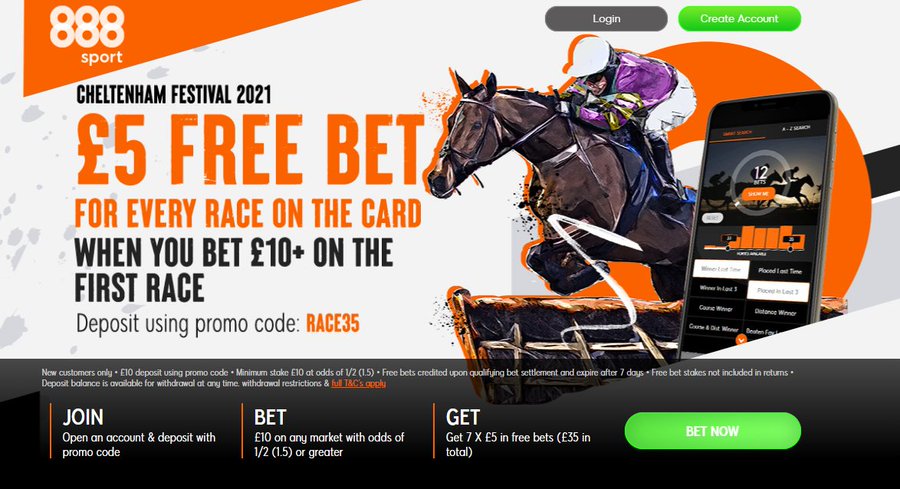 One of three Grade 1 contests on the final day of the Cheltenham Festival is the Albert Bartlett Novices’ Hurdle. It's a Grade 1 National Hunt hurdle race, run over a distance of about three miles, for horses aged four years and upwards. This makes the race the starting platform for many young horses, who go on to have great racing careers at a high level.

Despite being one of the newest races at the festival this event has already provided us with high class winners, thrilling finishes and more. The AB Novices' Hurdle is where we will see future Gold Cup and future Stayers Hurdle horses.

Beaten on his hurdles bow in the autumn at Stratford (2m 6f, good) when he finished second to The Bull McCabe, BARBADOS BUCKS comes at Prestbury Park with three minor events over this trip between November and January. He rubber-stamped his Festival ticket with a stylish Kempton victory.

STATTLER ran a perfectly credible race when finishing third to stablemate Gaillard Du Mesnil at the Dublin Racing Festival. He fought off stablemate Glens Of Antrim in the Pigsback.com Maiden Hurdle at the end of December and put himself right into the picture for a tilt at this race.Anyway, his stamina is questionable as he has never raced over a trip as far as this.

Denise Foster-trained FAKIERA is also prominent in the betting. He had three runs in maiden hurdles between 2m and 2m 2f last season and was second in all of them. He was a winner of a Grade Three race at Navan back in November, but he has subsequently been beaten six lengths in a Grade Two race at the same track.

ALAPHILIPPE shaped like a thorough stayer on his first three starts over hurdles plus relished the step up to three miles when a 14-length winner at Haydock last time out. His only blip for Alaphilippe this season was when he finished a narrow second over an inadequate trip and track at Taunton.

TORYGRAPH is progressing nicely and has appreciated the step up to this trip on both occasions. His stamina could be a pivotal facotr in this contest.

ADRIMEL has done nothing wrong this season. He gave Tom Lacey one of the biggest wins in his career by taking the Grade Two Leamington Novices’ Hurdle at Warwick last month.

STREETS OF DOYEN has been in fantastic form this season and landed the biggest win if his career over the course and distance back in October when ridden by Richard Johnson.

Join Ladbrokes today, get a £1 no deposit free bet to use on any Cheltenham race!

Check out below our expert picks on the Albert Bartlett Novices' Hurdle 2021. Feel free to copy our Cheltenham Festival free betting tips and get the highest prices available on the market by clicking the 'Bet' button! Plus, we suggest you to visit our Enhanced Odds section to claim boosted prices.

Looking for the best Cheltenham free bets or new Cheltenham Betting Offers? Take a look below!

What time is the Albert Bartlett Novices' Hurdle?

The Albert Bartlett Novices Hurdle is the 3rd race run on Day 4 of the Cheltenham Festival. That falls on Friday March 19, 2021 and the official starting time is 2:50pm.

How many obstacles are jumped in the Albert Bartlett Novices' Hurdle?

What is the distance of the Albert Bartlett Novices' Hurdle?

What is the prize money for the Albert Bartlett Novices' Hurdle?

The total prize money on offer for the Albert Bartlett Novices Hurdle at the 2021 Cheltenham Festival will be £125,000.

Last year's renewal was won by Monkfish at SP of 5/1, trained by Willie Mullins and ridden by Paul Townend.

What weights are carried for the Albert Bartlett Novices' Hurdle?

11st 5lb, with a 7lb allowance for fillies and mares.

Who is the leading jockey in the Albert Bartlett Novices' Hurdle?

Last year's winning rider Paul Townend is the only current jockey to have won the Albert Bartlett more than once.

Who is the leading trainer in the Albert Bartlett Novices' Hurdle?

Willie Mullins has won 2 of the last 4 runnings. Nicky Henderson has struck once, as has Colin Tizzard and Harry Fry in recent years.
SHARE IT WITH YOUR FRIENDS
Let your friends know about this article! Share it on your favourite social media!

A struggling Manchester United continue their tough run of fixtures on Thursday night against an...