Norway suffered a 1-0 home defeat to Belarus on Wednesday, and it was hardly the best preparation for the Scandinavian nation. They haven’t had any success in the qualification campaigns since their last appearance at the Euros in 2000. Norway finished 3rd in their Euro 2016 qualifying group behind Italy and Croatia, although their return of 19 points from ten games highlighted a decent performance

Manager Per-Mathias Hogmo has lost winger Pal Andre Hjelland to injury as well as midfielder Valon Berisha, who has decided to pledge his future to new UEFA members Kosovo. Young talent Martin Odegaard has failed to impress enough so far and has not been included in the first team. The likes of Manchester United academy graduate Joshua King, Hull City’s Adama Diomande and Jo Inge Berget will expected to pick up the slack in the absence of Odegaard. West Ham midfielder Havard Nordtveit will start in the middle of the park.

Germany warmed up for Sunday's clash with a 2-0 friendly win against Finland courtesy of a Max Meyer contribution and an own goal. They failed to add the European crown to the World Cup when they lost 2-0 to hosts and eventual runners-up France in the semi-finals of this summer’s tournament. They have kept a clean sheet in four of their last seven away matches.

Die Mannschaft begins life without Bastian Schweinsteiger, who retired form International Football last week. Manuel Neuer is set to start in goal in his first competitive international game after being named the captain of the German national squad and Low is not expected to make any alterations to his Euro 2016 defensive lineup. Striker Andre Schurrle has joined the injury list, 20 year old defender Niklas Sule is hoping to make his debut, whilst Toni Kroos could partner Dortmund youngster Julian Weigl in the middle of the park. 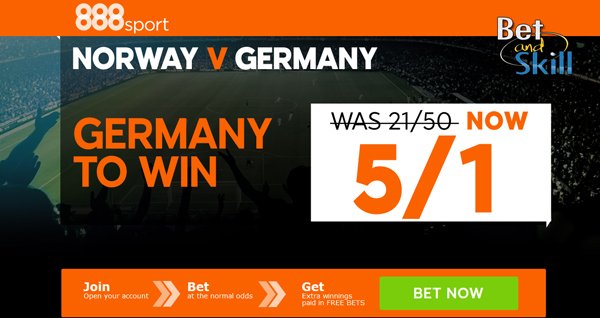