Newcastle made a miserable start to the season as they lost their first two Premier League games and crashed out of the League Cup at the hands of Nottingham Forest. Anyway, the Magpies started to fire on all cylinders recording three wins in a row in Premier League against West Ham (3-0), Swansea (0-1 away) and Stoke City (2-1). Their three-match winning run was halted by Brighton last weekend (1-0). Benitez's ment have turned their home into something of a fortress thanks to just two defeats on Tyneside in 15 league outings.

Aleksandar Mitrovic returns from suspension but Benitez is likely to stick with Joselu up-front. The settled midfield four of Matt Ritchie Isaac Hayden, Mikel Merino and Christian Atsu look set to retain their starts, with Ayoze Perez continuing in the support striker role. Changes are also unlikely in defence, with DeAndre Yedlin, Jamaal Lascelles, Ciaran Clark and Chancel Mbemba the favourites to start. Florian Lejeune is doubtful due to an ankle injury, and Paul Dummett and Massadio Haidara also remain absent. 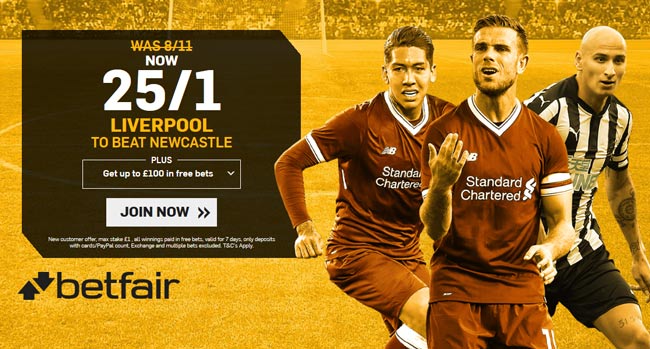 Liverpool enjoyed a thrilling 3-2 victory against Leicester City last weekend but recorded another 1-1 draw with Spartak Moscow in Champions League on Tuesday night, meaning they have now won only one of their last six competitive fixtures. That run includes a heavy defeat to Manchester City and the EFL Cup exit at the hands of Leicester. Their defense remain a concern - the Reds have conceded at least two goals in four of their last six games. The Reds may sit in fifth place in the Premier League table but their two draws in Champions League have put them in a dangerous situation. In terms of direct matches, Liverpool have lost on their last two trips to St James' Park in the Premier League.

Sadio Manè returns from a three-match ban and will almost certainly link up with Coutinho, Firmino and Salah in attack in a 4-2-3-1 system. As a result, one of Georginio Wijnaldum or Emre Can should drop to the bench, with Jordan Henderson lining up in the defensive midfield role. The likes of Joe Gomez, Joel Matip, Ragnar Klavan and Alberto Moreno should form the four man backline, with Dejan Lovren, Andrew Robertson and Trent Alexander-Arnold as alternatives. Nathaniel Clyne and Adam Lallana remain sidelined.