The Super Bowl LI will be contested by 'veterans' New England Patriots and 'newcomers' Atlanta Falcons, the number one ranked defense in the NFL and the number one ranked offense in the league. This article contains our Super Bowl LI betting preview, with tips, predictions, enhanced odds, bookie offers and no deposit free bets on New England Patriots vs Atanta Falcons!

New England are making a record-setting seventh Super Bowl appearance of the Bill Belichick/Tom Brady era and they have already won four Vince Lombardi Trophies. Hence, there is no shortage of experience in the New England team. Their 14-2 record in the regular season was the best in the NFL. The Patriots recorded a good 36-17 victory over the Pittsburgh Steelers in the Conference Championship match.

The Patriots  were the the best defensive team of the league this season, giving up an average of just 15.6 points per game. They rank in the middle of the pack in sacks (34) and interceptions (13), but they are No. 3 against the run, allowing 83.9 yards per contest, and eighth overall with 308.9 yards per game surrendered. Other than Tom Brady, they have other NFL stars in their roster - Julian Edelman, one of the most underrated receivers in the game, and LaGarrette Blount, one of the most versatile running backs in pro football. 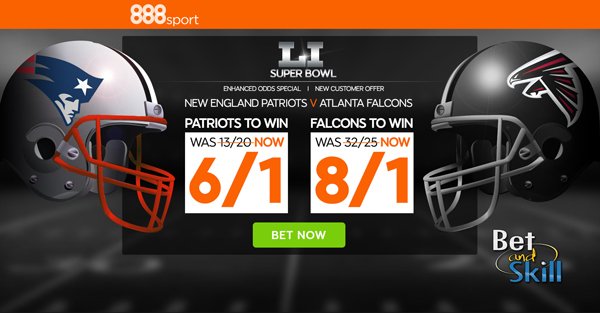 Atlanta in contrast have never been crowned champions, while their only previous Super Bowl outing back in 1999 ended in defeat to the Broncos. The Falcons have a 13-5 record this season (12-6 ATS) and were superb defeating the Green Bay Packers 42-21 in their Conference Championship game. They have the best wide receiver in football in Julio Jones while quarterback Matt Ryan is playing at an incredibly high level this season. He  has thrown for 338 yards and 3 touchdowns in the Divisional Round win over the Seahawks and followed that with a 392-yard, 4-touchdown performance in the NFC Championship Game. A Pro Bowl running back as Devonta Freeman will help to take the load of Ryan’s shoulders.

Atlanta Falcons have relied on one of the most dynamic offenses we have seen in the modern era. Anyway, they have struggled at times to generate a consistent pass rush—they tied for 16th in the league with 34 sacks during the regular season. The Falcons don't have the same defensive abilities of the Patriots—they've given up 28 or more points nine times this year alone.