Manchester United are enjoying a 16 match unbeaten run in all competitions. They have a League Cup final to look forward to later this month, they are still in the mix in the FA Cup and they sit 6th in the Premier League, just two points below 3rd placed teams Tottenham and Arsenal. In Europa League the Red Devils finished as runners up to Fenerbahce with four wins and two defeats. They won all three home games, 1-0 against Zorya, 4-1 against Fenerbahce and 4-0 against Feyenoord.

Anthony Martial should retain his place in the team after impressing against Watford at the weekend, forming an attacking midfield trio alongside Juan Mata and Henrikh Mkhitaryan. Phil Jones missed last match, so it remains to be seen whether he will be fit here. Zlatan Ibrahimovic is expected to retain his central striker berth despite Marcus Rashford and Wayne Rooney are pushing for a recall.

Saint-Etienne are currently 5th in Ligue 1 where only Paris Saint-Germain (19) have conceded fewer goals (18). They enter this match on the back of a 4-0 success over Lorient, a result that followed a 1-0 defeat at Nice and a 2-0 win over Lyon the previous week. Away from home they have won three of their last eight games though, losing four times. The French outfit are unbeaten in all 10 of their Europa League games this season and have four of their five away matches in the competition.

Les Verts will be facing United without Robert Beric who is out through injury. The Slovenian forward has joined Alexander Soderlund and Oussama Tannane on hte sidelines, while Erin Pinheiro and Cheikh M'Bengue are both doubtful. Nolan Roux is likely to spearhead the attack with Henri Saivet, Romain Hamouma and Kevin Monnet-Paquet behind him. In midfield, Kevin Theophile-Catherine and Vincent Pajot will play in the middle of the park. Paul Pogba's brother Florentin Pogba will start at left back. 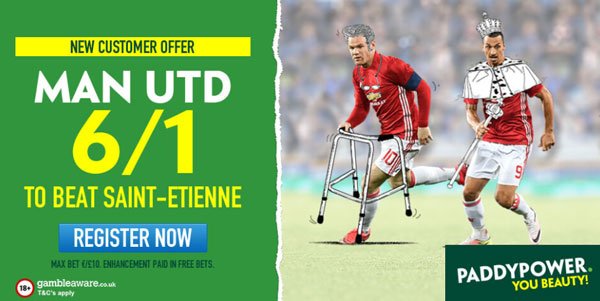