Third take on fourth in Premier League this Sunday as Arsenal head to Manchester City, a crucial match for both teams as they are vying for a direct qualification to the group stage of the 2016-2017 Champions League tourney. Find here our MANCHESTER CITY v ARSENAL betting preview with predictions, betting tips, best odds, probable lineups, bookie betting promos and no deposit free bets!

Manchester City has 64 points and trail Arsenal in third by three points. The Citizens need a win to secure a Champions League automatic qualification. Their 4-2 defeat at Southampton last week, end their 5 match unbeaten run in the league. They will be eager to bounce back from their disappointing defeat to Real Madrid, a 1-0 defeat at Bernabeu that costed them the Champions League final.  These results leave the Citizens winless in threeconsecutive matches in all competitions (D1-L2).

Manuel Pellegrini is set to be without Vincent Kompany after the Belgian defender picked up a hamstring injury at the Bernabeu on Wednesday night. He joins David Silva, Pablo Zabaleta and Aleksandar Kolarov in the sidelines. Raheem Sterling could also return to the City lineup after starting the Champions League semi-final in Madrid on the substitutes' bench, while Yaya Toure is expected to retain his place in midfield. 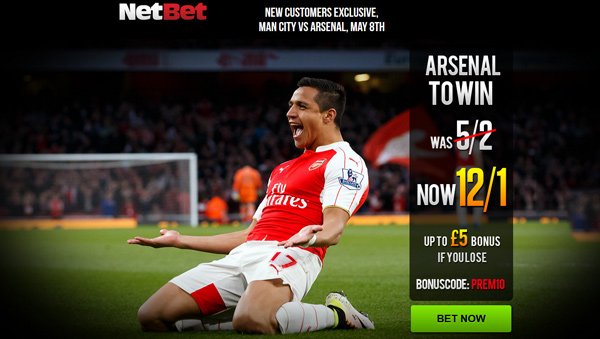 Arsenal were 1-0 winners at home against Norwich last weekend and they are unbeaten in seven and have kept a clean sheet in each of their last three matches. A win would obviously guarantee third position in the Premier League standings and the confidence is high - the Gunners are unbeaten in their last four BPL meetings with City, winning the last two.


Mesut Ozil, Alex Iwobi and Alexis Sanchez appear sure starters in the three attacking midfield positions in the usual 4-2-3-1 formation while Olivier Giroud and Danny Welbeck are in contention for the lone striker starting berth. Per Mertesacker picked up a hamstring injury against Norwich, his place will be taken by Gabriel. Alex Oxlade-Chamberlain (knee) is sidelined for six to eight weeks and he is ruled out of Euro 2016. Jack Wilshere is in line to make his first start of the season having come off the bench last weekend.

Arsenal enjoyed themselves against Manchester City in 2015, ending a four year winless run at the Etihad with the perfect away performance in a 2-0 January win before holding on to a 2-1 victory at the Emirates just before Christmas.