Man United’s quest for a return to the Champions League suffered another setback as they were held to a draw by West Bromwich Albion at the weekend. In the Premier League they are undefeated in their last 19 matches but they have won three and drawn five of their last eight, leaving them 5th in the table, five points behind Manchester City in fourth place, but with a game in hand. The Red Devils have lost just one of their last 23 home league meetings with Everton (W18 D4).

Juan Mata is likely to miss the rest of the season after undergoing groin surgery last week. Zlatan Ibrahimovic will return to the United starting line-up this Tuesday after serving a suspension over the weekend while Paul Pogba could also be in line to return, after recovering from an injury suffered against Rostov. Ander Herrera also served his ban and could start in midfield along with Micahael Carrick. In defense, Daley Blind will hope to come in at left-back but Ashley Young is favourite to get nod and form the four man backline with Marcos Rojo, Eric Bailly and Antonio Valencia.

Everton succumbed to a 3-1 defeat in the Merseyside derby last Saturday and remained in seventh place, six points ahead of West Brom in eighth and just a point behind Arsenal in sixth, but the have played two more games than the Gunners. At Goodison Park, the Merseysiders have been in terrific form and have lost just one game in front of their own supporter but away from home in particular they have struggled - failing to win in four and winning just two of their last twelve games on the travels ahead of this clash. The Toffees have also won just one of their last five league visits to Old Trafford, scoring just eight goals in their last 12 league visits to the "Theatre of Dreams"

The likes of Yannick Bolasie, Seamus Coleman, Ramiro Funes Mori, Muhamed Besic and Morgan Schneiderlin are all out through injury while James McCarthy is a major doubt.
Matthew Pennington could drop out of the XI, with Ronald Koeman switching to a back-four here. Romelu Lukaku will retain his starting berth while the youngster Calvert-Lewin could be benched. In the 4-2-3-1 starting system, Kevin Mirallas, Ross Barkley and Enner Valencia should be the offensive midfielders with Idrissa Gueye and Gareth Barry in the middle of the park. 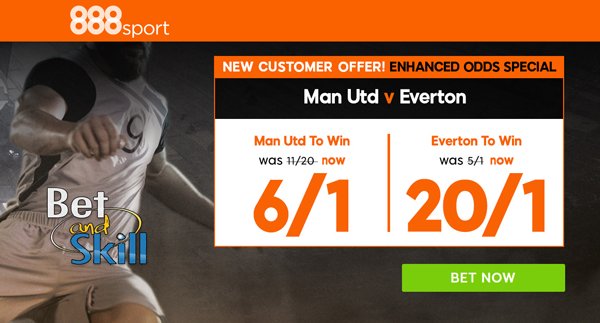