Manchester United are currently fifth in the table and six points off the top four, having suffered a dismal league defeat up at relegation-threatened Sunderland last time out. The Red Devils avoided further humiliation in midweek as they progressed in the Europa League hammering 5-1 the Danish minnows after the 2-1 loss in the first leg.

Louis van Gaal will be sweating on the fitness of Anthony Martial for the visit to Arsenal to Old Trafford after he felt his hamstring in the warm-up before Thursday's Europa League match. With Wayne Rooney also expected to be sidelined, 18-year-old Marcus Rashford may have to continue up front. Ander Herrera could also be used in the attacking midfield areas, with Michael Carrick and Morgan Schneiderlin the leading options to start at the base of midfield. David De Gea and Chris Smalling could be back for United after both missed the game against Midtjylland through injury. Phil Jones, Marouane Fellaini, Adnan Januzaj and Will Keane are all serious doubts.

After a dramatic win over Leicester City, Arsenal trailed the Foxes by just two points heading into the final 12 games of the season. They have also won just two of their last six league games and need to get all three points here because Leicester have nailed a 1-0 win over Norwich yesterday. The Gunners were beaten 2-0 by Barcelona at Emirates Stadium in Champions League but if they had shown more composure in front of goal they could have easily been at least on level terms when the final whistle blew.

Alex Oxlade-Chamberlain is out after picking up a knee injury against Barcelona in midweek, paving the way for Theo Walcott to return to the starting XI with Alexis Sanchez and Mesut Ozil looking sure starters in the advanced positions. Gabriel requires a late fitness test ahead of this trip. Should he be ruled out, Per Mertesacker will start next to Laurent Koscielny in central defence. Jack Wilshere, Santi Cazorla and Tomas Rosicky remain out.

Man Utd are undefeated in 11 of their last 12 home matches against Arsenal in all competitions, with 8 victories and 2 draw in the last eight Premier League home meetings with Arsene Wenger's men. Anyway, the Gunners recorded a 3-0 win when they welcomed Man United to the Emirates in the league earlier this season, ending a run of 8 league games without a victory against the Red Devils. Last season's Premier League match at Old Trafford, meanwhile, finished 1-1. 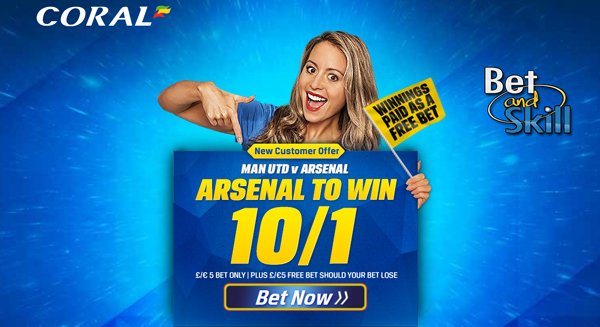 Enhanced Odds: get 10/1 on either team to win! (Mobile exclusive)

Unbeatable price! Get 10/1 Arsenal to beat the Red Devils

Max 1 free €/£5 bet per customer. Applies to all pre match Bet Builder bets on each of England’s Euro 2020 group games only. Min 2+ legs. Must have previously deposited with a debit card, Apple Pay or Paysafe to avail of the offer. Excludes shop bets. T&Cs apply.
18+. Online & mobile. One €/£1 Free Bet per person available for a 5-A-Side on Euro 2020 matches only from 10:00 to 20:00. Stake not returned. Cashout excluded. T&Cs apply.
New customers only. £10 minimum deposit using promo code "888ODDS" required. Qualifying bet must be placed at the normal odds Min bet £5, max bet £5. Extra winnings paid in FREE BETS and added within 72 hrs of qualifying bet settlement. Free bet stakes not included in bet returns. Free bets expire 7 days after credit. This offer may not be combined with any other offer. Deposit balance is available for withdrawal at any time. General deposit method & withdrawal restrictions apply & Full T&C’s apply
18+. Play Safe. New customers using EPS60. Mobile only. Applies to bets placed from 09:00 on 28th May 2021 until 14:00 on 14th June 2021. Max £1 bet at 60/1. Returns paid as 6 x £10 free bets (30 day expiry). Player & currency restrictions & terms apply.
18+, Welcome Bonus: New Players only, 1st Deposit, Min Deposit: £10, max £20 free bet valid for 14 days, bets must be placed at odds of 1/1 or greater and be settled within 14 days of placement. System bets no eligible.
Sign up at TonyBet, make your first deposit and receive 100% of this amount as a welcome gift. Bonus code TONY200. Wagering requirements 10x deposit on betting markets with odds of at least 1.65 within 30 days. A player who made a deposit via NETELLER, SKRILL, Paypal or BITCOIN is not eligible for this offer. 18+. T&Cs apply.
18+. New customers only. $/€5 no deposit bonus for mobile verified customers only. Minimum deposit $/€10. Maximum bonus $/€50. Wagering requirements on winnings from bonus x15. Full T&Cs apply.
Play Safe. 50% Back of First Day Sportsbook Losses up to £25 Or a Guaranteed £5 Free Bet when you Bet £10. UK Customers | Coupon code 'BET' | £5 Free Bet provided you place at least 1 bet of £10 or greater at minimum odds 2.00 | (18+) T&C apply | begambleaware.org | gamstop.co.uk | Play Responsibly

England's next game in Group D is against Scotland on Friday at Wembley. The Three Lions...