Manchester UTD come into the match on the back of a 2-0 win at home against Chelsea despite resting the likes of Zlatan Ibrahimovic and Henrikh Mkhitaryam. That result extended their unbeaten in the Premier League to 22 games (W12 D10). Jose Mourinho's men have an impressive home record in Europa League so far. The Red Devils have won all five of their UEL matches at Old Trafford so far and scored 3+ goals in three of those games. They only managed a 1-0 win over Rostov in their last home game in this competition.

Jose Mourinho has confirmed Sergio Romero will start in goal despite David de Gea's return to action on Sunday. Jesse Lingard suffered a foot injury against Chelsea that required ice after the match but he should recover in time to make the bench while Matteo Darmian and Marouane Fellaini could keep their places in the team after impressing in recent outings. Zlatan Ibrahimovic will spearjead the attack, with the likes of Marcus Rashford, Paul Pogba and Henrikh Mhkitaryan likely to form the offensive midfield trio. Wayne Rooney is a doubt for Manchester United again, whilst Juan Mata, Chris Smalling, Phil Jones, and James Wilson remain sidelined. 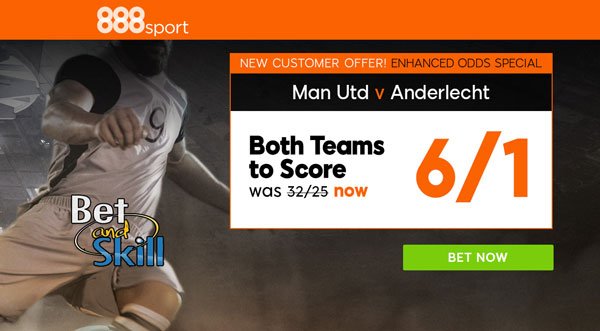 Anderlecht come into this fixture on the back of a 1-0 away win against KV Oostende at the weekend, to put them six points clear of Gent at the top of the Belgian First Division table. As a result, they have recorded a four wins and two draws in their last six matches. The Belgian outfit has suffered only one defeat in Europa League this season, and that was in the dead rubber at St. Petersburg in the round of 32.

Lukasz Teodorczyk was only fit enough to start on the bench in the first leg but should be recalled to the starting XI on Thursday. The likes of Massimo Bruno, Micolae Stanciu and Frank Acheampong will start as offensive midfielders behind the Polish striker while Youri Tielemans and Leander Dendoncker will retain their berth in the middle of the park. Goalkeeper Ruben Martinez and right back Andy Najar are major doubts, whilst midfielder Adrien Trebel is ineligible.