Manchester City host Leicester City in the Premier League on Saturday lunch-time with a win needed to keep up their bid for a top four finish. This article contains our Man City v Leicester betting preview with predictions, betting tips, probable lineups, team news, best odds, bookmakers promotions and no deposit free bets on this clash!

Man City are in pole position to finish third, having moved to a point behind Liverpool with a game in hand. A 5-0 trouncing of Crystal Palace on Saturday saw Manchester City stretch their unbeaten home run to 10 Premier League games. The Citizens have lost just a single game at Etihad this season and the defeat came against league leaders Chelsea. Anyway, their weak point this season has been their home record, with barely a 50% per cent win rate (nine wins out of 17). Plus, Guardiola's men have won only one out of seven at home to current top-half teams.

Sergio Aguero and John Stones have both trained over the past few days, and are available for this clash. Anyway, Gabriel Jesus is likely to lead the line, with Raheem Sterling, Kevin De Bruyne, David Silva and Leroy Sane behind the Brazilian youngster. Yaya Toure could continue in the defensive midfield role in the 4-1-4-1 formation, with Fernandinho remaining at right-back meaning that Pep Guardiola could name the same XI that dismantled Crystal Palace last weekend. Claudio Bravo and Ilkay Gundogan are both out.

Leicester have secured the safety after last week's 3-0 home win over Watford. They come into this game with 2 victories in a row, recording two clean sheets in the process. They have won seven of their 10 Premier League matches since Craig Shakespeare became their interim manager. Anyway, they have managed just two wins on their travels in the 2016/17 Premier League. The Foxes beat City 4-2 at home in December - under Claudio Ranieri -  thanks to a Jamie Vardy hat-trick. Furthermore, they thrashed the Citizens 3-1 in the corresponding fixture last season.

Craig Shakespeare has revealed Danny Drinkwater may not feature again until next season with a thigh injury. Wes Morgan remains out and Robert Huth will also be assessed ahead of the match. As result, Yohan Benalouane looks a sure starter in central defence. Riyad Mahrez, Wilfred Ndidi and Marc Albrighton are expected to continue in midfield, with Andy King the most likely to replace Drinkwater. The likes of Shinji Okazaki and Jamie Vardy will combine in attack once more in the 4-4-1-1 formation, with Demaray Gray, Ahmed Musa and Islam Slimani providing further options. 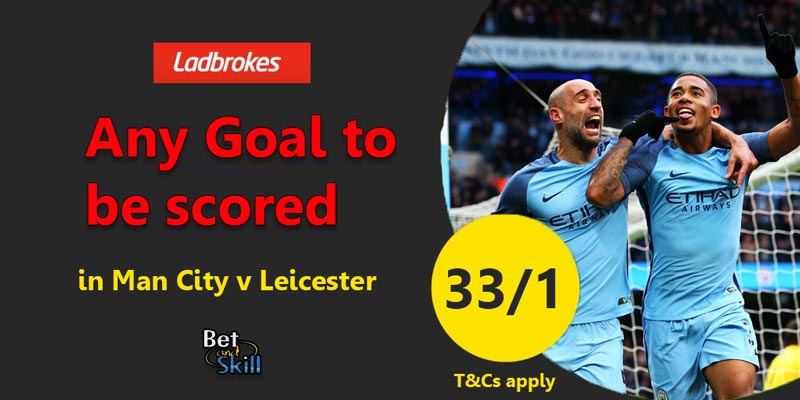