Manchester City had to work hard by a stubborn Brighton on the opening day. A Sergio Aguero strike and a Lewis Dunk own goal in the final 20 minutes earned them a 2-0 victory at the Amex Stadium. The Citizens are unbeaten at home since losing 3-1 to Chelsea on December 2016. They have lost just two of their last 10 competitive matches against Everton but their last Premier League meeting with the Toffees ended with a heavy 0-4 defeat at Goodison Park.

Pep Guardiola should confirm the 3-1-4-2 formation that enabled Sergio Aguero and Gabriel Jesus to play up front together last weekend. John Stones, Vincent Kompany and Nicolas Otamendi could form the three-man defence once again, then, with Kyle Walker and Danilo remaining in the wing-back roles. Fernandinho will be the midfield shield while Kevin De Bruyne and David Silva should support the attacking duo. Anyway, Guardiola has plenty of options - Bernardo Silva, Leroy Sane and Raheem Sterling. Big money left back Benjamin Mendy remains sidelined, whilst Samir Nasri is still out injured too. Long-term absentee Ilkay Gundogan made his return against Girona, but may not be in contention to start yet.

Everton opened their Premier League campaign with a narrow 1-0 victory over Stoke City, courtesy of a Wayne Rooney header. The Toffees also beat Hajduk Split 2-0 in the first leg of their Europa League playoff on Thursday to make it four wins from four competitive games this season. They are yet to conceded a competitive goal so far, keeping four clean sheets in a row. Everton have lost only one of their last five meetings with Manchester City in all competitions.

Sandro Ramirez should shake off a minor knock to be available for the match. Whether new £45million signing Gylfi Sigurdsson is available to play any part remains to be seen, so Davy Klaassen and Wayne Rooney could start behind lone striker Sandro if Ronald Koeman opts for a 3-4-2-1 formation. In the three-man defence, Phil Jagielka, Ashley Williams, Michael Keane should all start. Leighton Baines should continue at left wing-back with Cuco Martina or Dominic Calvert-Lewin on the other flank .Wantaway midfielder Ross Barkley is still apparently injured, with James McCarthy, Ramiro Funes Mori, Seamus Coleman, and Yannick Bolasie all sidelined too. 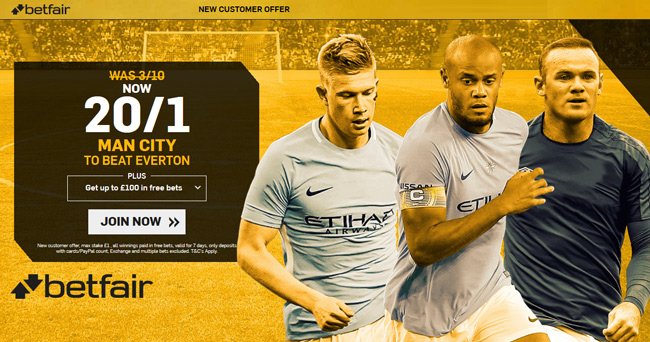