Liverpool host Swansea City in the Premier League on Saturday's early kick-off, and the Reds will be looking to regain some form with a big win over the Premier League’s bottom club. This article contains our Liverpool v Swansea betting preview with predictions, betting tips, probable line-ups, team news, best odds, bookie offers and exclusive no deposit free bets on the Premier League!

Liverpool's recent Premier League form is fairly average. The Reds have recorded two draws in their last two outings - one a creditable one against Man United and one a 2-2 stalemate against struggling Sunderland. Anyway, a much-weakened team got the better of Plymouth Argyle (1-0) in the FA Cup third round replay on Wednesday. Jurgen Klopp's men secured a 2-1 victory over Swanseaat the Liberty Stadium back in October. That win was the sixth for the Reds in the last seven matches against their Welsh rivals.

Sadio Mane is away with Senegal at the Africa Cup of Nations. Nathaniel Clyne is expected to recover from a rib injury to return against Swansea City, but Joel Matip is still awaiting international clearance and appears unlikely to be available. Trent Alexander-Arnold will keep his place at right-back if Clyne is ruled out, while Matip could be replaced by Ragnar Klavan. Up front, Roberto Firmino is likely to start in his preferred central role, due to Philippe Coutinho‘s return. That would allow Adam Lallana to operate in his preferred position in the three-man midfield, possibly alongside Georginio Wijnaldum and Jordan Henderson. 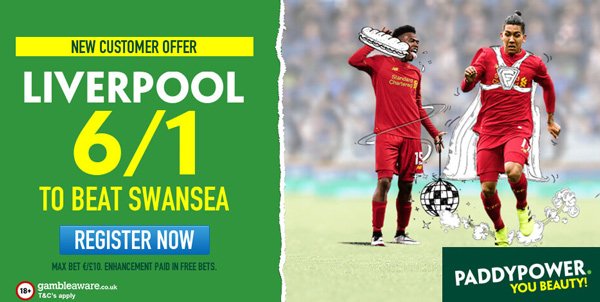 Swansea won their last away league outing against Crystal Palace, but they enter this match on the back of two defeats in a row - a 2:0 against Hull City in FA Cup and a 0-4 home defeat against Arsenal in Premier League last weekend. The Swans have 5 of their last 6 matches in Premier League and 6 of the 7 games they have played against a top-6 team. Furthermore, they have attained just seven points on their travels this term. Swansea currently are bottom of the table (level on points with Sunderland), just one point behind Crystal Palace and Hull City.

Paul Clement revealed the trip to Anfield may come slightly too soon for new signing Luciano Narsingh, who is recovering from a calf problem. Other new signings Martin Olsson and Tom Carroll are expected to make their debut. Modou Barrow is a doubt for the Swans, while Jefferson Montero and Neil Taylor are surely out. In attack, Gylfi Sigurdsson may be forced to play on the left in a 4-3-3 formation leaving Fernando Llorente as central striker, although Borja Baston is pushing for a start.