Leicester was in fine form before this weekend, having won four matches on the bounce before the mishap in the 3-0 home defeat to Crystal Palace on Saturday, a team that had not scored a single goal on their travels this season. They have found the net in nine of their 11 competitive home fixtures this season, but at the other end they have kept just four clean sheets and two of those came against relegation candidates. Anyway, the Foxes have already dumped Liverpool out of the League Cup this season and will look to get another scalp in this competition.

The hosts are without Wilfred Ndidi following his red card at the weekend, while  while Roberth Huth and Matty James are both sidelined. Claude Puel will probably shuffle his pack with Kelechi Iheanacho and Leonardo Ulloa likely starters in attack. Christian Fuchs and Shinji Okazaki also are all in the mix to return after they were controversially rested at the weekend. The likes of Aleksandar Dragovic, Andy King and Daniel Amartey are also expected to feature from the off while Marc Albrighton and Demaray Gray could retain their berth as offensive wingers.

Manchester City enter this match on the back of another impressive display display in the 4-1 trouncing of title rivals Tottenham on Saturday. They boast a 11 points commanding lead at the top of the Premier League table thanks to a near-flawless record, with only 2 points dropped so far in 18 matchweeks. They are now at 16 wins in a row in the top flight. The Citizens dominated proceedings and won 2-0 when they visited the King Power Stadium in the league earlier this season.

Pep Guardiola has so much depth at his disposal and could be tempted to rotate his team. David Silva isn't expected to feature here after the Spaniard missed last time out due to personal reasons. Gabriel Jesus is expected to start upfront, replacing Sergio Aguero as lone striker. Danilo, Yaya Touré, Phil Foden, Oleksandr Zinchenko, Bernardo Silva, Tosin Adarabioyo and Claudio Bravo are also pushing for game time. Vincent Kompany is a doubt and should not be risket while John Stones and Benjamin Mendy remain out through injury. 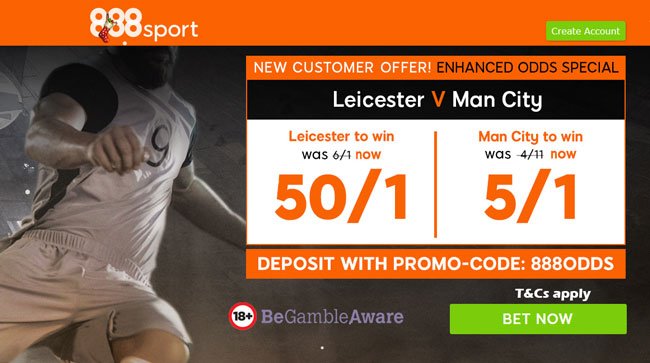 You can watch and bet on Leicester vs Manchester City live at bet365.com