The Republic of Ireland will look to take top spot in Group D when they face Serbia in a must win World Cup qualifier in Dublin on Tuesday. Who will win at the Aviva Stadium? Don't miss our Ireland v Serbia betting preview including predictions, betting tips, starting line-ups, team news, enhanced odds and no deposit free bets on this qualifier!

Ireland now sit 2nd in their World Cup qualifying group, two points behind their opponents Serbia and now only two points ahead of the chasing Wales, who face bottom of the group Moldova on Tuesday. The "Boys in Green" are now winless in the last three matches as they drew Wales, Austria and Georgia, respectively. These two teams have already met once during this qualifying campaign and they were forced to settle for a 2-2 draw in rain-soaked Belgrade. The Irishmen have only scored twice in 3 qualifiers at home, but they have conceded only one goal. A low scoring affair is on the cards.

Jeff Hendrick will miss this crucial match after failing to recover from a thigh injury while  Aiden McGeady and Wes Hoolahan are fitness concerns. Hull City's David Meyler should feature from the off in midfield, alongside Harry Arter, Robbie Brady and James McClean. Up front, Jonathan Walters shook off an injury to take part in the game against Georgia and should be fit to partner Shane Long. The likes of Seamus Coleman and James McCarthy are the long-term absentees. 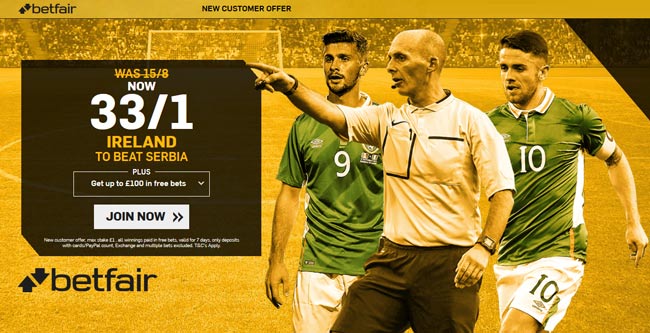 Serbia enter this clash following a routine success over Moldova (3-0) on Saturday night. They have won four and drawn three of their matches since this campaign began. This is the last game for Slavoljub Muslin’s side against any of the nations with realistic qualification hopes as they will face Austria and Georgia. The visitors will not take any risks here, since a draw would be good to mantain their lead in the group. These countries have met four times previously, Serbia winning once in a 2014 friendly match at the Aviva Stadium and the other three ending as draws.

Slavoljub Muslin is likely to stick with his 3-4-3 formation. Midfielder Nemanja Matic and Southampton star Dusan Tadic were taken off as precautions during the win over Moldova and they will both start this clash. Up front, Aleksandar Mitrovic will be the central striker with Tadic and Filip Kostic on his flanks. The three man defense will be formed by Branislav Ivanovic, Nikola Maksimovic and Matija Nastasic wile Aleksandar Kolarov will play as wing back as he is doing with his clus AS Roma. Crystal Palace midfielder Luka Milivojevic should get the nod over Nemanja Gudelj as central midfielder.