Swansea will be hoping to pull off a shock win when they travel to Stamford Bridge to take on Chelsea on Wednesday. Will they upset the Blues? Check out below our Chelsea vs Swansea betting preview with free predictions, betting tips, starting lineups, team news, best odds, exclusive betting offers and no deposit bonuses on all the sports!

Chelsea could only manage a draw with Liverpool on Saturday (1-1) and now trail league leaders Manchester City by 11 points. The Blues are undefeated in their last 5 Prmeier League outings but have have collected only 10 points from a possible 18 in Premier League games as hosts. They also are unbeaten in 9 of their last 10 matches against Swansea in all competitions. The Blues haven’t had the most impressive of seasons on home soil with just a W3 D1 L2 record on the board, but they have won their last two there now, beating Watford and Manchester United. Antonio Conte's defense have conceded just once in their last four league fixtures - against Liverpool at Anfield.

Cesc Fabregas will be expected to earn a recall having been restricted to 16 minutes off the bench at Liverpool. Victor Moses was an unused substitute at Anfield and should make his first start since October 14, replacing Davide Zappacosta as right wing back. Marcos Alonso should retain his start on the opposite flank. Eden Hazard will again be expected to remain in a No 10 role played up with lone striker Alvaro Morata. The likes of Willian and Pedro are viable alternatives while Michy Batshuayi is injured. Charly Musonda and David Luiz are the other missing players for the home side. 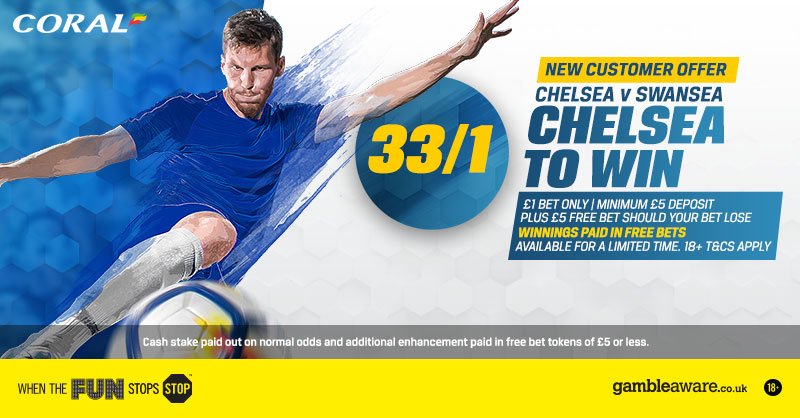 Swansea enter this match on the back of a 0-0 draw to Bournemouth at the Liberty Stadium, the third consecutive game in which the Welsh outfit have failed to score. The Swans have only recorded 1 draw and 5 defeats in their last 6 matches in all competitions and currently sit 19th in the league table. Anyway, their total of only five goals conceded on their travels is of top-four standard with  Manchester City the only team to have conceded fewer away goals than Swansea in the Premier League this season. Only Manchester United have put more than two goals past Swansea anywhere so far. Furthermore, Swansea have lost only one of their last four games against Chelsea.

Tammy Abraham cannot play against his parent club due to the terms in his loan agreement. He will be replaced by Wilfried Bony, who will partner Jordan Ayew in attack. Paul Clement opted for a midfield diamond at the weekend, so Roque Mesa, Ki Sung-yeung and Tom Carroll may all retain their starts. At the tip of the diamond, Leroy Fer should get the nod over Renato Sanches. In defense, Federico Fernandez missed the goalless draw with Bournemouth following the death of his father and will miss the next two matches after he was allowed to fly back to Argentina. With Kyle Bartley still sidelined, Alfie Mawson and Mike van der Hoorn should continue in central defence for the Swans.