Chelsea host their final game of the season this weekend when the Blues welcome new champions Leicester to Stamford Bridge. Who will come on top? Don't miss our CHELSEA v LEICESTER betting preview with predictions, betting tips, enhanced odds, lineups, bookie promotions and no deposit free bets on the final Premier League match of the season!

Chelsea recorded the worst defence to a Premier League title ever and even a win over the Foxes will see the Blues finish no higher than ninth place. The Blues impressed in leading Liverpool 0-1 at Anfield up until the stoppage-time equalizer scored by Christian Benteke on Wednesday night. They prefaced that result with a 3-2 defeat at Sunderland last weekend meaning that they have won only two of their last 11 matches in all competitions (L5-D4). Another usually-strong area of their game that has been shockingly below par this season comes at the back, with Chelsea keeping just one clean sheet in their last 13 league games and posting their worst defensive record for 19 years with 52 goals conceded.

Guus Hiddink will be without captain John Terry due to suspension. Diego Costa's fitness remains to be seen after he also was sidelined last time out. Branislav Ivanovic remains a doubt and that could see Obi Mikel play at the heart of the defense. Nemanja Matic and Cesc Fabregas look set to combine at the base of midfield in the usual 4-2-3-1 formation once more, with Eden Hazard likely to keep his starting spot in the number ten role. 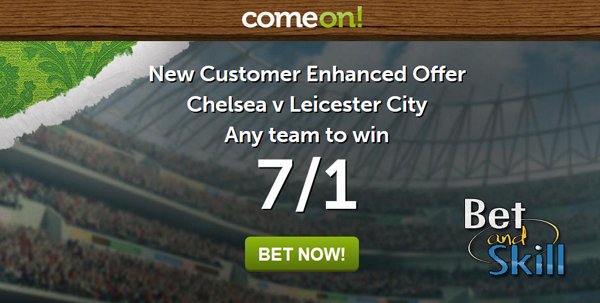 Leicester won the Premier League title with two games to spare after the Blues did them a favour and drew 2-2 with Tottenham earlier this month. The Foxes showed they are still hungry as they thumped Everton 3-1 last weekend and that result leaves them W8-D3-L0 through their last 11 in the top flight. They have lost just two of their last 21 league away games and are guaranteed to end this season with the best record on the road in the top flight, while only Spurs can boast a better away defensive record.

Claudio Ranieri will have Danny Drinkwater available again after he missed last time out. Jamie Vardy suffered cramp in his hamstring during the end of last weekend’s match but appears keen to play as he looks to give chase for the Golden Boot award. Robert Huth serves the last of his three-match ban here while Matthew James could make his first Premier League appearance of the season.

Chelsea had won eight matches in a row in all competitions against Leicester before they met at the King Power Stadium in December. That clash ended in a 2-1 win for Leicester, which ignited the proceedings that led to the sacking of Jose Mourinho. Seven of Chelsea’s last 10 home league games have ended in a draw.