Arsenal and Manchester UTD go head to head in Saturday's late kick-off in Premier League. Can Arsenal maintain their 100% home record or will Mourinho get one over on Wenger yet again? Don't miss our Arsenal vs Man UTD betting preview with free predictions, betting tips, probable lineups, team news, enhanced odds, betting offers and no deposit free bets on all the sports!

Arsenal enter this match on the back of three consecutive wins. A superb 2-0 derby win over Tottenham was followed up with a narrow away win at Burnley last weekend (0-1), and a 5-0 hammering of Huddersfield in midweek. The Gunners are unbeaten at home this season, winning 10 of their 11 competitive matches at the Emirates. In league games, they have a 100% winning record and have outscored the opposition 20-4. Furthermore, they have kept three straight clean sheets in Premier League. Arsene Wenger's men have lost just one of their last six meetings versus the Red Devils. Anyway, the Frenchman has won just one of his last 13 Premier League games against Jose Mourinho.

Alexandre Lacazette has been ruled out due to a groin injury picked up in the 5-0 win over Huddersfield Town in midweek. Alexis Sanchez, Olivier Giroud or Danny Welbeck could start as the lone striker, with the Chilean now available after he was taken off as a precaution against Huddersfield. Mesut Ozil should retain his staring berth after an impressive performance last time out, with Alex Iwobi offering a viable option. The rest of the side could stay unchanged. Granit Xhaka and Aaron Ramsey should both continue in central midfield, leaving Hector Bellerin and Sead Kolasinac in the wing-back positions and a settled back-three of Laurent Koscielny  Nacho Monreal and Shkodran Mustafi. The only long-term absentee is Santi Cazorla while Theo Walcott is a major doubt.

Manchester United also go into this match on a three-game win streak having thumped Watford 4-2 on Tuesday night. Prior to that, the Red Devils beat 1-0 Brighton and 4-1 Newcastle at Old Trafford. Despite this impressive form, they are still trailing Manchester City by 8 points in the Premier League standings. Josè Mourinho's men have lost three of their last five away games in all competitions. In terms of direct encounters, they have not won at the Emirates Stadium since 2014, following 3-0 and 2-0 defeats in their most recent appearances at the Gunners' home.

Nemanja Matic is a doubt ahead of the trip to North London because of a muscle injury. Marouane Fellaini is also missing due to a knee injury, meaning that Paul Pogba could be forced to take a central midfield slot alongside Ander Herrera. That would see Juan Mata or Jesse Lingard starting behind the front duo. Romelu Lukaku appears a sure starter despite his poor form in recent times, while Marcus Rashford is favourite over Anthony Martial for the remaining berth. Antonio Valencia and Ashley Young are likely to continue as wing backs while the likes of Marcos Rojo, Chris Smalling and Victor Lindelof could all start once again if Phil Jones and Eric Bailly remain sidelined. 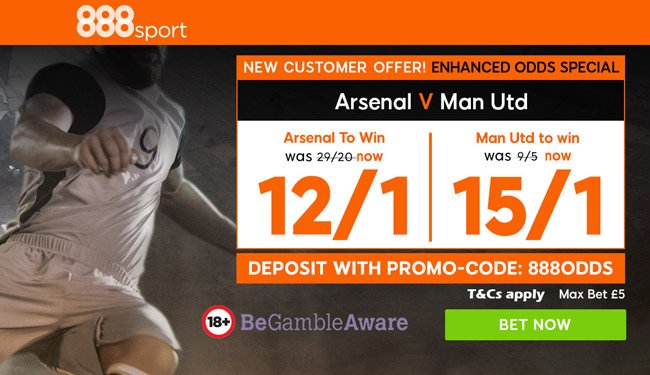