Wolfsburg are fifth in the Bundesliga and enter the match on the back of a 1-2 home defeat to Borussia Dortmund. Die Wolfe equalised in the 90th minute against Borussia Dortmund on Saturday, only to concede moments later to Shinji Kagawa.

As to the Champions League, only two points separate the top three in this group. Wolfsburg top the standing with 9 points, Manchester United is one point behind, PSV sit third with seven points whilst CSKA can finish no higher than third. They will probably secure the first place in the standings if they avoid defeat here.

Dieter Hecking welcomed back star player Julian Draxler to the side and he hopes Luiz Gustavo will now return from a back problem. Dante will be available after serving a suspension, Ricardo Rodriguez is a major doubt, while the game may come too soon for Robin Knoche. Bas Dost started the weekend's defeat as a substitute, so he could be recalled to the starting XI here. 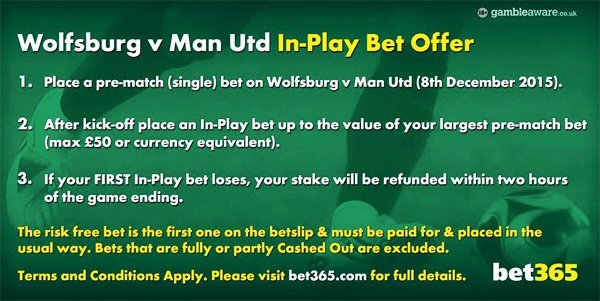 Man United have been solid and consistent at the back, conceding only three goals in the last 10 fixtures in all competitions but a third consecutive draw at home to West Ham and a fourth goalless draw of the season drew more criticism for the Dutchman and his tactics. In spite of the good Premier League position, it is perfectly clear the Red Devils are not performing to their potential. The Red Devils need to match the result of PSV Eindhoven at least.

Jesse Lindgard should shake off a thigh problem to start while Memphis Depay should be benched once again. Morgan Schneiderlin, who was forced off during the game against West Ham with a hip problem, will miss the trip to Germany. Wayne Rooney, Marcos Rojo, Phil Jones, Ander Herrera, Antonio Valencia and Luke Shaw are all out through injury. Paddy McNair is named in the squad despite coming off against the Hammers with an ankle injury.

Wolfsburg have won both of their home Champions League matches this term, keeping clean sheets in those games. Anyway, they have played the Red Devils three times previously in the Champions League; losing all of them.