Wales face minnows Uruguay in Cardiff in a Pool A fixture when they open their Rugby World Cup campaign on Sunday. As romantic as it would be if Uruguay were to cause an upset, there is literally no chance of it happening. Don't miss our WALES v URUGUAY match preview with betting tips, predictions, enhanced odds, starting XVs, free bets and no deposit bonuses! 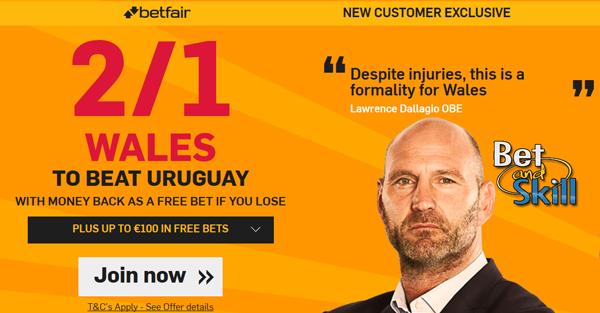 WALES v URUGUAY BETTING PREVIEW Wales were one of three teams still in contention for the Six Nations title entering the final round of matches but they eventually finished third, behind Ireland and England on points difference. They recorded two wins in their final two warm-up matches before the tournament. Their first was a great response in a 16-10 win in Ireland because that came just a week after they had been outclassed by the Irish on home soil. Gatland's men then managed to just close out a 23-19 win over Italy

The Dragons have lost full-back Leigh Halfpenny just before the start of the tournament and his replacement Liam Williams hasn’t played since back in June after a foot surgery. Star players like George North, Jamie Roberts, Dan Biggar, Gethin Jenkins, Alun-Wyn Jones and Taulupe Faletau sit out the match ahead of next week's crunch Twickenham clash with host nation England. Sam Warburton captains the team, but he will wear the No 6 shirt, with Justin Tipuric at openside flanker.

Uruguay come into the world cup as the second lowest ranked side. They prepared for the 2015 Rugby World Cup with an away double match against Japan (losing in both cases) and closed their warm-up fixtures with a game against a Spanish region: the Basque Country. Actually, they are building a team to be more competitive in future World Cups.

The South Americans, whose entire squad are at their first World Cup, have named their strongest side. Four members play their rugby in Europe while the rest remain in Uruguay, apart from Alejo Corral who plays for San Isidro for Argentina. In the absence of their most important player – Rodrigo Capo Ortega – his locking partner Santiago Vilaseca will captain the side.