Scotland welcome the "Auld Enemy" England in a mouth-watering World Cup qualifying match at Hampden Park in Glasgow on Saturday. Can the Three Lions continue their push for a place in Russia next year with a victory over the Tartan Army? Don't miss our Scotland v England match predictions, betting tips, probable line-ups, team news, enhanced odds and no deposit free bets on the World Cup qualifiers!

There has never been a more depressing time to be a Scotland fan than now. Several poor results put them 4th in their World Cup qualifying group, 2 points adrift of a potential playoff spot and 6 points off the top spot. Anyway, they secured a vital win in their last game against Slovenia, a late goal handing them a narrow 1-0 win at Hampden Park. The Scots scored in their last 12 home matches. The Scots have beaten England only once in 10 meetings since 1986, with the victory coming back in 1999.

Gordon Strachan has made a number of changes to his squad with him leaving out the likes of Steven Fletcher, Jamie Murphy, and Kenny McLean, calling up three uncapped players including Bournemouth winger Ryan Fraser. Kieran Tierney will wear a mouthgard after suffering a serious mouth injury in the Scottish Cup Final. Stuart Armstrong made his debut in their last match and may continue in behind the lone striker Leigh Griffiths. 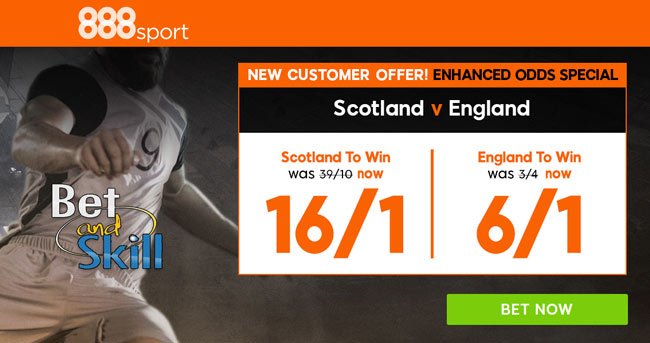 England top Group F comfortably at the moment and are yet to concede a goal in their five games. The Three Lions go into this game four points ahead of Slovakia in second. Gareth Southgate has had a mixed time in charge of the senior side, having lost 1-0 to Germany in the last international break, they followed that up with a straightforward 2-0 win over Lithuania. They have an excellent record in qualification, winning 14 of 15 unbeaten games since the start of Euro 2016 qualifiers, keeping 13 clean sheets. The Three Lions beat Scotland 3-0 when the two teams met at Wembley Stadium last November and ran out 3-1 winners when they last visited Glasgow in November 2014.

No major shocks are planned by Gareth Southgate. He should field a 4-2-3-1 formation in which Alex Oxlade-Chamberlain and Eric Dier should play in the middle of the park. Harry Kane will lead the line, as Jamie Vardy suffered a minor injury. The offensive midfield trio should be formed by Adam Lallana, Raheem Sterling and Dele Alli. In defense, Gary Cahill and John Stones are likely to be paired at the centre, while Kyle Walker and Ryan Bertrand will start as full backs.