After fifteen weeks of tough competition a quarter of the greatest darters face off for the right to be crowned 2015 Premier League Champion on Thursday night. Don't miss our betting preview on the Premier League Darts final night with free tips, betting predictions, enhanced odds, free bets and no deposit bonuses!

Premier League darts final night : Betting preview
Three of the four semi-finalists are appearing at the O2 for the second successive season as Phil Taylor may have failed to qualify for the play-offs for the first time in the history of the competition and surprise package Dave Chisnall has joined Gary Anderson, Michael Van Gerwen and Raymond Van Barneveld. Both Michael van Gerwen and Dave Chisnall enter the O2 with tournament averages of over 100, but in truth all four men bring strong recent form into Thursday’s showdown.

PDC World Champion Gary Anderson takes on Dave Chisnall in the opening semifinal before favourite Michael van Gerwen takes on Raymond Van Barneveld in a mouth-watering Dutch derby. The semifinals will be played over the best of 19 legs, extended from the best of 12 during the league phase. The final match length will be extended again, changing from best of 19 legs to best of 21.

Michael Van Gerwen finished the regular campaign in top spot for the third consecutive year. Mighty Mike goes into the final night as red hot favourite to be win the tile having lost only three games this season and showing a 104+ average in the tournament. He won 8 of his first 10 Premier League matches but then had a dip in form losing three of his next five encounters. He back at his best averaging 111.9 in his draw with Chisnall last weekend.

Gary Anderson finished third in the Premier League table and enter the match in-form. He recorded a stunning 7-5 victory over Van Gerwen in Cardiff in April, beat Adrian Lewis last week with a good 97 average and made a PDC tour final last weekend where he whitewashed Van Gerwen on route 6-0 before to lose to Taylor in the final 6-4.

Dave Chisnall would have finished at the top of the Premier League table had he won the final leg of his match last week against MVG. That match ended 6-6. 'Chizzy' has hit more 180s than any other player in the competition (62) and boasts an impressive tournament average of 101.39

Raymond Van Barneveld has looked unstoppable in recent times, winning six and drawing one since 'Judgement Night' including a 7-3 victory over his countryman in April. He and edged out six-time Premier League winner Phil Taylor for the final berth in the play-offs. Should he go one to lift the trophy, Barney would become only the second player ever to have retained the Premier League title since the event was introduced back in 2005. 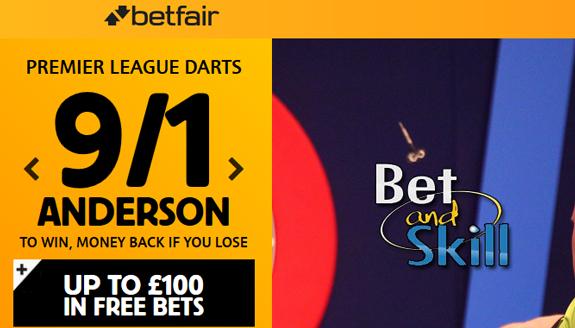 Free bet if final checkout is 100+

£200 welcome bonus - the best bonus on the Internet!