With home advantage and a bigger, more talented squad - Celtic are definitely the favourites. The Bhoys have qualified for the UEFA Champions League for the first time in three seasons and are already top of the domestic table, despite having played a game less than all of their rivals. They have scored ten goals in three league games and eighteen in their last five competitive matches. Beating Aberdeen 4-1 last time out has set down a real marker to the rest of the league.

Dedryck Boyata and right back Cristian Gamboa are expected to miss out on Saturday. Striker Leigh Griffiths has been in great form this season and will lead the line alongside Tomas Rogic and Scott Sinclair. The likes of Nir Bitton, James Forrest and Scott Brown are expected to start in midfield.

Rangers are just behind Celtic in 2nd with an eight point tally so far. The Gers began the campaign by walking the Scottish League Cup group stages, winning all four of their matches and not conceding a single goal. Then they drew 1-1 with Hamilton Academical in their SPL opening match. They bounced back with an impressive 5-0 win over Peterhead in the League Cup and beat 2-1 Dundee and Motherwell in the league. Finally, Rangers extended their unbeaten record this season recording a 1-1 draw against Kilmarnock before the international break.

Rangers are hoping to have a fully fit squad on Saturday, including the recently recovered Martyn Waghorn. Anyway, Joe Garner picked up an injury against Linfield and is a serious doubt for this game while Philippe Senderos hasn’t played competitively since May so may not get the nod for this weekend. Kenny Miller is likely to play as lone forward in a 4-5-1, supported by Joey Barton and Joseph Dodoo from midfield.

These two teams recently met twice. Firstly in February 2015 when Celtic cruised to a 2-0 semi-final League Cup win over Rangers at Hampden before last season’s dramatic 2-2 Scottish Cup Semi-Final at the same venue which was eventually won by Rangers on penalties. 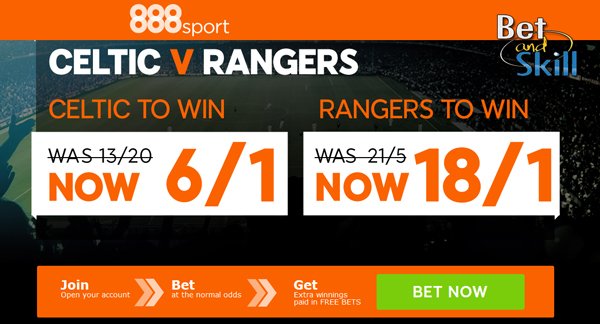 You can watch and bet on Celtic v Rangers live at bet365.com