Monaco welcome Juventus in the 1st leg of the Champions League semifinal on Wednesday night. Will Juventus stay on course for the treble or will Monaco continue their fantastic run in the competition? Don't miss our Monaco v Juventus betting preview with predictions, betting tips, starting lineups, team news, boosted odds, exclusive free bets and no deposit bonuses on this clash.

Monaco currently find themselves sat at the summit of the Ligue 1 table with PSG just three points behind them in second place. Their most recent match was a 3-1 win over Toulouse. They’ve banged in 95 goals in 34 league games this season. In Champions League, they cruised through their quarter-final tie against Borussia Dortmund - 6-3 on aggregate as their 3-2 away win was followed by a 3-1 home success. Leonardo Jardim’s team have won six of their seven home matches in this 2016/17 UEFA Champions League, the exception a 1-1 draw with Bayer Leverkusen in the group stage.

Fabinho returns for Monaco after being suspended for the second leg of the quarter-final. Djibril Sidibe is sidelined and Almamy Touré is a doubt after missing their last two matches. Anyway, Benjamin Mendy overcame injury to feature for Monaco at the weekend and he will start here. Forward Radamel Falcao and midfielder Tiemoue Bakayoko are doubtful but should recover in time to feature. The likes of Bernardo Silva and Thomas Lemar will retain their berth as wingers as well as the young and talented Kylian Mbappe upfront.

Juventus are firmly on course of their sixth straight Italian title, although they conceded a late equalizer on Friday to draw away to Atalanta on Friday. The Bianconeri have conceded just two goals in their ten outings in the competition and kept two clean sheet against Barcelona. They stormed to a 3-0 win when they hosted Barca in the first leg of their quarter-final and completed the job with a goalless draw at the Camp Nou. Massimiliano Allegri’s men have lost only one of their last 22 matches in all competitions (against Napoli in Coppa Italia) and remain unbeaten in Champions League.

Sami Khedira is suspended for the first leg, which could see Claudio Marchisio come into the starting XI. The Italian international will partner Miralem Pjanic in the middle of the park in the usual 4-2-3-1 starting system. Up front, the lone striker Gonzalo Higuain will be supported by Paulo Dybala, Juan Cuadrado and Mario Mandzukic. No changes are expected in defense where Giorgio Chiellini, Leonardo Bonucci, Alex Sandro and Dani Alves will feature from the off. Daniele Rugani is a major doubt while Marko Pjaca remains out through injury. 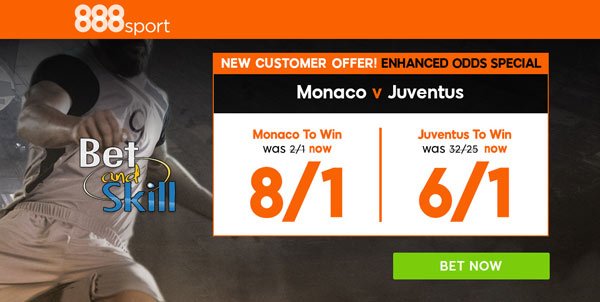