Big-serving Milos Raonic progressed to this first-ever Major final by winning a five-set battle with Roger Federer, as we predicted in our betting preview. He was take the distance in one of the previous matches too when he came back from two sets to love down to beat David Goffin in the third round. The other tough match was a 3-1 win over Sam Querrey, who put out Novak Djokovic.

Raonic is contesting his maiden grand slam final while Murray is chasing his second Wimbledon title, his first since grand slam title since 2013 and his third overall behind his Wimbledon and US Open triumphs. The British number one has lost eight Grand Slam finals, including defeats this year in the final of the Australian Open and the French Open against Djokovic, and will be looking to snap a three-final losing streak.

Murray leads the head-to-head matchup 6-3 and has won the last five meetings with Raonic. The Brit has already beaten the Canadian on grass this season having recorded a 2-1 success in the final of the AEGON Championship at Queen’s Club 6-7 (5-7) 6-4 6-3, which is one of the traditional preparation events for Wimbledon. Murray also came back from two sets to one down to beat the big Canadian in the semi-finals in the Australian Open in January. Raonic's last win against Murray was at Indian Wells in 2014.

Murray is superior to the Canadian in virtually ever department, with Raonic's only weapon his serve. The Scot has broken Raonic 20% of the time he has faced him, which equates to one break every set. 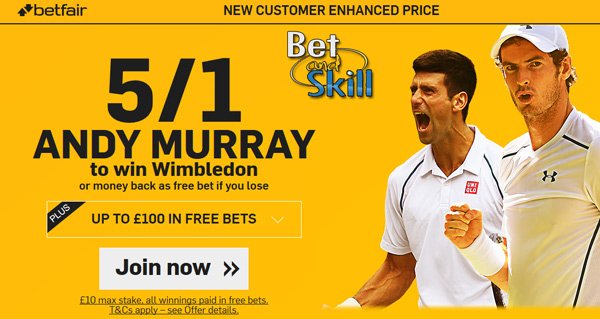 Get a €5 no deposit bonus on eSports with Tipbet!