Floyd Mayweather and Andre Berto are set to fight on Saturday, Sept. 12 at the MGM Grand Garden Arena. Mayweather is simply the better fighter by a large stretch but fights are not decided on paper, and Berto could pull off one of the biggest upsets in boxing history? Don't miss our MAYWEATHER vs BERTO betting preview, with free tips, predictions, best odds, free bets and no deposit bonuses on the fight! 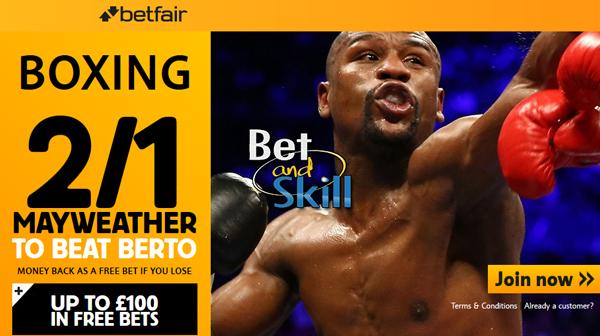 The contest is expected to be the last of 'Money' Mayweather's 19-year professional career, as he tried to equal Rocky Marciano's unbeaten 49-0 career record. Many have criticised his choice of opponent. By picking Berto instead of Amir Khan or Kell Brook, Mayweather essentially told boxing fans that he cares little about putting on a good spectacle.

Mayweather is Berto's superior in almost every category with the exception of power. His first advantage comes in the reach department. Floyd checks in with a 72-inch reach compared to Berto’s 68 ½ inches. "Money" is not particularly known for his power. In fact, he only has a single knockout since 2007 (Victor Ortiz in 2011) and registered the vast majority of his 26 career stoppages in his early bouts.

31 year-old Andre Berto sports a 30-3 career record with 23 KO's. In his last fight he defeated Josesito Lopez by a TKO on March 13th to win the Interim WBA Welterweight title. Anyway, he has lost three of his last six fights since shoulder injuries derailed what was once a promising career. One of those losses came to Robert Guerrero, who was thoroughly outclassed by a rusty Mayweather in May 2013.

Berto's best chance is probably with his own powerful jab and uppercut ability, especially if he can catch Mayweather off guard at some point. He has more power than Mayweather, as shown by his record of 23 knockouts in 30 wins.