The unbeaten Floyd Mayweather will be exiting retirement to take on Conor McGregor, the biggest star in mixed martial arts, in a boxing match on August 26th. Will 'Money' take his perfect professional record to 50-0 or will 'The Notorious' pull off one of the biggest shocks in boxing history? This article contains our Mayweather v McGregor betting preview, including expert predictions,  enhanced odds, bookmakers free bets and no deposit bonuses!

The light-middleweight boxing match will take place in Las Vegas on the August 26 and could earn each fighter up to $100m – making it the richest boxing event in history. Bookmaker Paddy Power has revealed that the Dubliner has attracted 91.9% of all bets placed in the first three weeks since the announcement with the undefeated Mayweather only accounting for 8.1% of wagers despite being the overwhelming favourite. The majority of bookmakers have the 'Mayweather win by stoppage' as favourite in the method of victory market, despite the last man 'Money' stopped was Victor Ortiz back in 2011.

Floyd Mayweather has enjoyed a flawless professional career that has seen him retiring with a perfect 49-0 record, proving to be a master in the boxing ring over the years – a master of defence that has rarely been rocked in his entire career. He beat fighters such as Manny Pacquiao, Oscar De La Hoya, Shane Mosley, Juan Manuel Marquez and Ricky Hatton during his career. His last fight saw Mayweather comfortably beat Andre Berto in September 2015.

Mayweather has had his problems with southpaws, but they were left-handed fighters with professional boxing experience – McGregor has none. The American mastered the art of hitting and not getting hit and adapting to opponents styles. His elusive style will tire and frustrate his opponent, who will probably load his shotss as he does in UFC, wasting a lot of energy. We saw in the first Nate Diaz fight that McGregor can be rocked, especially when he is tired. Hence, the longer the fight goes on the more it will play into the hands of Mayweather.

Whilst Mayweather’s record is perfect, Conor McGregor is 21-3 in professional MMA bouts and 17-1 in the last 18 of these. 14 of those last 17 victories were by knockout.  The Irishman became the first man to hold UFC titles in two difference weight classes last year. The UFC lightweight champion McGregor has never had a professional boxing bout in his combat sports career. Anyway, a footage has emerged of Conor McGregor knocking down former sparring partner Paulie Malignaggi showing that McGregor knocking him down with a left hook to the face

Conor McGregor will look to press Mayweather early on and go for a quick knockout, since his cardio is not as good as required as shown in his defeat in the first fight against Nate Diaz. Anyway, despite UFC being a mixed martial art combat sport, all of McGregor’s stoppage victories have come because of his boxing skill so there is no doubt the Irishman can box. If the UFC star can land his lethal left-hand an upset could be on the cards. Furthermore, 'The Notorious' believes that Nevada State Athletic Commission decision to allow 8oz gloves for the mega-fight with Floyd Mayweather will play into his hands. 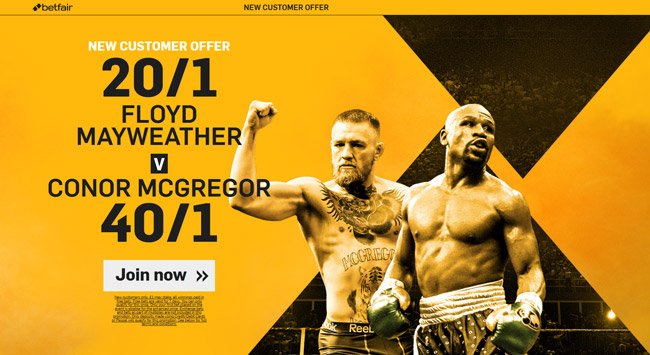 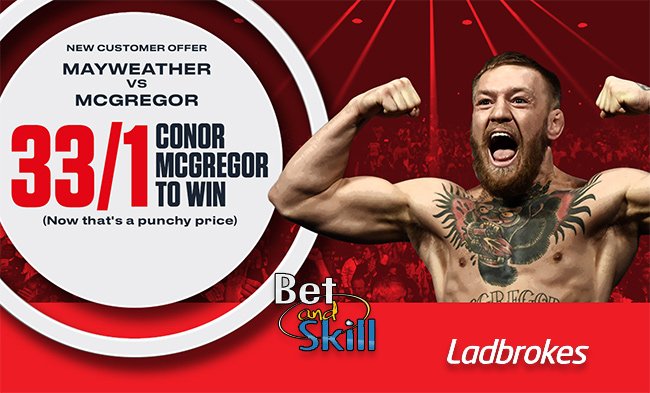 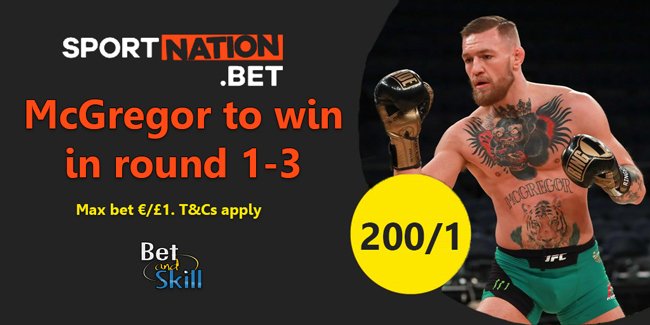 T&Cs: New users only. Min deposit £20. Place qualifying bets of £20 to £100 in first 7 days after deposit to unlock free bets. Free bet rewarded as 4 free bets that total first deposit amount. Min odds 1/1, 3+ legs & expire in 7 days. Winnings credited in cash. Full T&Cs apply
18+. New customers only. £1 Free bet on registration. Then get 50% back of first deay's losses as a free bet up to £25 when you deposit. Guaranteed £5 free bet either way when you firt bet £10 or more at odds of evens (2.00) or greater. Full T&Cs apply.
18+. New customers only. $/€5 no deposit bonus for mobile verified customers only. Minimum deposit $/€10. Maximum bonus $/€50. Wagering requirements on winnings from bonus x15. Full T&Cs apply.