Manchester United take on PSV Eindhoven in the Wednesday night Champions League clash at Old Trafford. Are you looking for the best betting tips on the clash? Read below our MANCHESTER UTD v PSV EINDHOVEN betting preview with tips, predictions, enhanced odds, line-ups, amazing bonuses and no deposit free bets!

Manchester UTD come from a hard-fought 2-1 win over Watford at Vicarage Road at the weekend and now they are just one point off the top of the Premier League table after 13 games. The Red Devils have conceded just one goal in their last six matches. In Champions League, Man UTD currently top the group with seven points, one more than PSV and Wolfsburg, and three more than bottom-placed CSKA. Three points would be sufficient to confirm their progression to the knock-out phase upon their return to Europe's elite competition.

Injuries sustained to Ander Herrera and Phil Jones at the weekend mean they will miss out here. Van Gaal will be hopeful that strikers Wayne Rooney and Anthony Martial are available for selection. Michael Carrick and Antonio Valencia are out through injury, but Bastian Schweinsteiger could feature despite missing Tuesday's trianing.

PSV enter the match after being forced to settle for a 2-2 draw against Willem II in the last fixture in Eredivisie which ended a run of four straight wins. That has left them third in the table, four points behind leaders Ajax. The Dutch team claimed a 2-1 win at the Philips Stadion when they welcomed Man UTD. They sit second in the Group B table but have lost both of their UCL away matches thus far.

The visitors are still missing defender Menno Koch through injury while Maxime Lestienne was given a special leave of absence at the start of October. Luuk de Jong, Jurgen Locadia and Narsingh are likely to form an attacking trio for PSV.
Jetro Willems is likely to be absent once again as he continues his recovery from a serious knee injury. 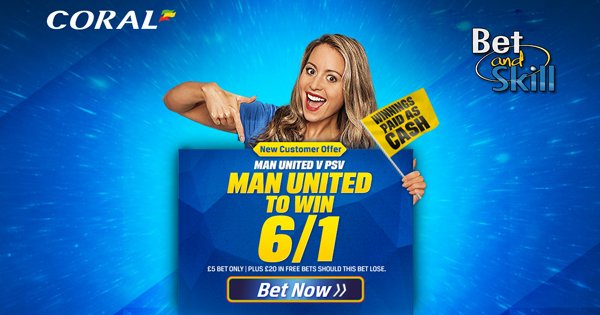