Man UTD top the Group A with nine points from nine after beating CSKA Moscow, Basel and Benifca in the first three matches and out-scoring their opposition 8-1. The Red Devils benefitted from a rookie mistake by 18-year-old goalkeeper Mile Svilar when beating 1-0 the Portuguese outfit a fortnight ago. Josè Mourinho's men enter this clash high on confidence after beating 1-0 Tottenham at Old Trafford on Saturday. They sit 2nd in the Premier League standings, 5 points shy of pace-setters Manchester City. United’s home record this season is particularly impressive, having won in all 7 matches in all competitions so far.

Jose Mourinho admitted he still doesn't know when midfield talisman Paul Pogba will return to first-team action. As a result, Ander Herrera and Nemanja Matic will retain their starting berth in the middle of the park, given also that Marouane Fellaini is still sidelined. The Portuguese manager was able to welcome Eric Bailly back into the fold on Saturday but he is expected to choose Phil Jones and Victor Lindelof as centre backs. Anthony Martial will be hopeful of a starting role having scored his fourth goal of the season off the bench against Spurs. The Frenchman should join Jesse Lingard and Juan Mata in the offensive midfield trio behind Romelu Lukaku, with Henrikh Mhkitaryan and Marcus Rashford likely to be rested.

Benfica are rock bottom with zero points after three matches and have slim chances of progression alive. They have been very disappointing so far, expecially when hammered 5-0 in Basel and have managed to score only one goal in their first three group games. Rui Vitoria's men have also only won three of their last 14 away fixtures in Europe, losing half of those and conceding nine goals without reply in their most recent two. Domestically, they are five points adrift of leaders Porto in the Primeira Liga standings and currently sit outside the Champions League places.

Veteran Brazilian defender Luisao was sent off last time out and will be suspended for the journey to Old Trafford. Jardel and Lisandro Lopez are in contenton to partner Ruben Dias at the heart of the defense. Andre Almeida missed the reverse fixture through suspension but will return at right-back here with Douglas injured. Jonas and Haris Seferovic will lead the line in a 4-4-2 system, with Pizzi, Lubomir Fejsa, Eduardo Salvio and Franco Cervi in midfield. 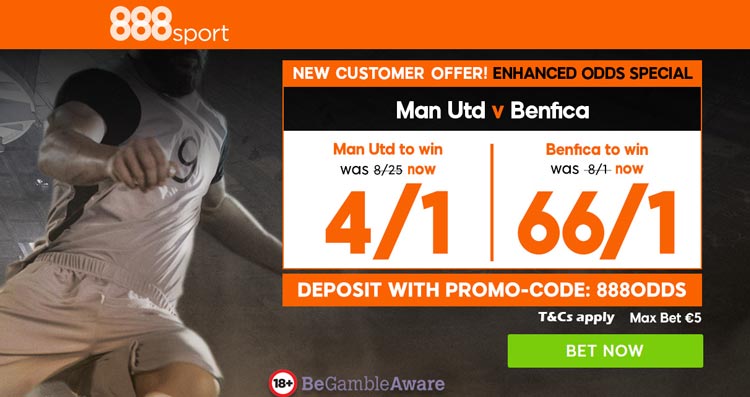