Liverpool returned from Germany with a 2-1 triumph over Hoffenheim and are very close to secure their place in the Champions League group stage. The first leg was an end to end affair, with both sides having numerous chances to score, including a missed penalty from Hoffenheim. The Reds played their first home match of the season on the weekend and earned a 1-0 win over Crystal Palace in Premier League. As a result, they have collected 4 points from their first two league matches as Jurgen Klopp's men only managed a 3-3 draw away to Watford in their Premier League opener.

The hosts are still without the injured trio of Adam Lallana, Nathaniel Clyne and Danny Ings while Philippe Coutinho is still rumoured to move to Barcelona before the transfer deadline and is not expected to feature. Mohamed Salah was a substitute against Palace, but will return to the starting XI at the expense of Daniel Sturridge. Trent Alexander-Arnold is expected to start as right back while Andrew Robertseo impressed on debut at the weekend and will be looking to keep Alberto Moreno out of the starting XI again. Jordan Henderson, Emre Can and Georginjo Wijnaldum are likely to start in the middle of the park. 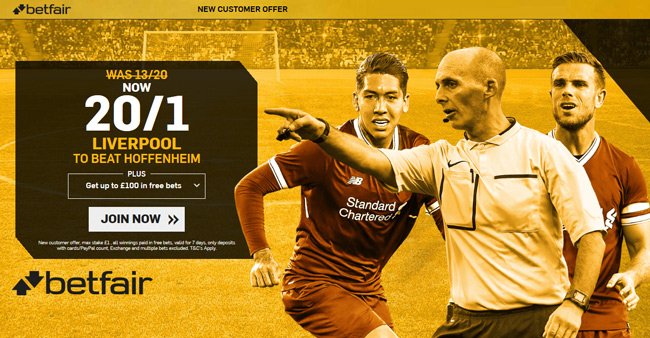 Hoffenheim started their Bundesliga campaign on the weekend with a narrow 1-0 win over Werder Bremen. Prior to that, they played another competitive game as they narrowly beat Rot Weiss Essen 1-0 in a DFB Pokal tie. The German side have scored in 25 of their last 27 competitive away matches. They will need to win by a 2 goal margin in order to qualify, or to win by 1 gola margin scoring more than two goals. A 1-2 away victory would see the team go to overtime and eventually on penalties.

The visitors have no fresh injury worries ahead of this game and will be at full strength. Andrej Kramaric and Serge Gnabry are expected to start behind Sandro Wagner in attack. Hence, Mark Uth might have to settle for a place on the bench despite scoring the late goal in the first leg. Jeremy Toljan and Nadiem Amiri also are in contention to play from the off, having sitted out last time out. Centre back Kevin Akpoguma and goalkeeper Alexander Stolz are expected to be missing for the German outfit.