Northern Ireland and Scotland’s champions will meet in the second qualifying round as Linfield welcome Celtic on Friday. This article contains our Linfield v Celtic betting preview with predictions, betting tips, probable lineups, team news, enhanced odds, exclusive bonuses and no deposit free bets on all the sports!

Linfield scraped through with a narrow 1-0 aggregate win over San Marino's La Fiorita in the first qualifying round. They have never made it further than the 2nd qualifying round in any European competition, and in the Champions League they have won just three of their 22 historical matches. Furthermore, Linfield come into this game on the back of a heavy 4-1 friendly defeat against Scottish Premiership outfit Hearts.

Former Manchester United goalkeeper Roy Carroll will start for Linfield. The hosts are expecting to be free from injuries on Friday, leaving star winger Josh Carson free to play. Jordan Stewart, who scored on his debut against La Fiorita, will be another danger man for the Blues, as he  is expected to lead the line alongside Waterworth. 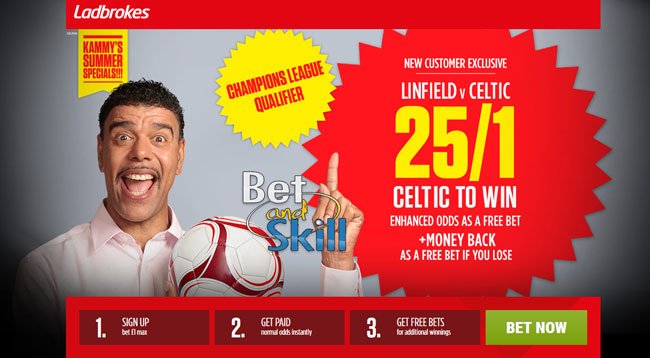 Celtic were very impressive last season under Brendan Rodgers as they won the Scottish Premier League last season, remaining undefeated throughout. The Hoops are overwhelming favourites here despite they are yet to play any competitive football this season, but we can't forget when Rodgers' men lost 1-0 away to Lincoln Red Imps in Champions League qualifying last year. The Scottish champions have beaten 9-0 Shamrock Rovers in the last firendly. Prior to that, they drew against Rapid Vienna and Slavia Prague in pre-season exhibition matches.

Moussa Dembele should lead the line, having scored in the last friendly match. New signing Jonny Hayes is expected to feature from the off while Scott Brown, who was taken off before half-time in the game against Rovers due to an Achilles problem, will miss the game. The game may come too soon for new signing from Manchester City, Olivier Ntcham, while the Bhoys will also be without Gary Mackay-Steven, who has joined Aberdeen on a two-year deal. Centre back Dedryck Boyata is out with a knee injury.