Kell Brook (36-1, 25 KOs) return to 147 pounds after moving up two divisions and suffering a heavy KO against Gennady Golovkin. In that fight, 'Special K' was pulled out by his corner in the fifth round after suffering a broken eye socket. Brook has never lost at 147 pounds and will defend his belt for the fourth time. He certainly is not the biggest welterweight around as he stands 5-feet-9-inches tall with a 69-inch reach but he has stopped almost 70% of his opponents so far.

Brook is an excellent boxer having outsmarted Shawn Porter on his way to the IBF title almost three years ago as he is capable of altering his style. The Brit can be an accurate counterpuncher who is quite quick and can put together good counters. Concerns are all related to his last fight against GGG. Not only does the British need to recover from a fractured eye socket, he needs to come all the way down middleweight. Moving up and down in weight is very difficult. When a fighter cuts weight they become weaker and it almost certainly will have a detrimental effect on the body.

Errol Spence Jr. (21-0,18KOs) is an unbeaten southpaw fighter. He already has some notable scalps on his record including European champion Leonard Bundu, Chris Algieri and Chris van Heerden. The manner in which the American has dispatched those opponents has ultimately led to the challenger being the odds-on favourite. He managed to do what Amir Khan, Ruslan Provodnikov and Manny Pacquiao failed by stopping Chris Algieri. Spence has boxed 77 rounds since turning pro in 2012, but has a lot of amateur experience as he competed at the 2012 Olympic Games in London, England.

Spence is a quality southpaw with good technique. He puts his punches together well. He has power and can work the body. Anyway, he was rocked by Emmanuel Lartey which has led many to doubt his chin and seems open vulnerable to a left hook and can be too hittable. Question marks also remain over the challenger’s stamina, but that is only because he has never had to go beyond eight rounds before. Furthermore, he has not yet mixed with a fighter of Brook’s calibre and has not been hit a lot by the level of opposition that he has fought thus far in his career. The key for Spence is how well he can take consistent shots from one of the sharpest punchers in the division. 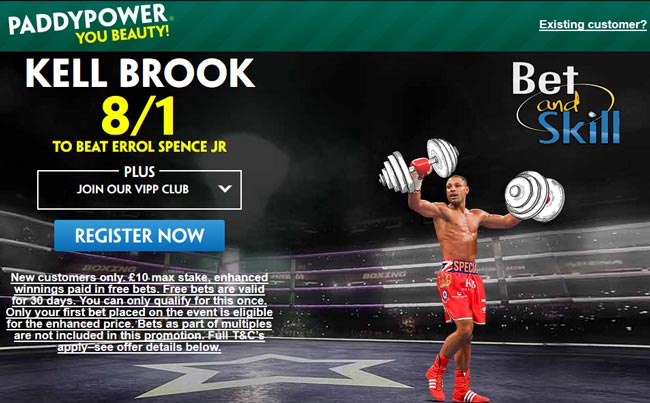