Anthony Joshua has won all 17 contests by stoppages  so far. After winning the IBF title against Charles Martin with a second-round knockout back in April, Dominic Breazeale extended him to seven rounds two months later. This was only the second time in his professional career he’d gone beyond three rounds.

AJ is bigger, taller and longer in reach than his opponent. His power, especially in his jab, will eventually wear down Molina, but he just has to be patient and keep his guard up. The 2012 Olympics Gold medallist has the full package -  good boxing ability, huge frame and big punching power. His overall ring time is much shorter but that’s only because he’s been dispatching opponents quickly.

Eric Molina lost his debut professional fight but he has put together 25 wins from 27 contests since. He lasted into the ninth round with Deontay Wilder, the WBC heavyweight champion last year with only 35 days to train. He recently went to Poland in April to face local favourite and former two-weight world champion Tomasz Adamek for the vacant IBF intercontinental title and the American produced arguably a career-best display to stop the tough Pole in the 10th round.

Eric Molina has knockout power, as his 19 knockouts in 25 fights displays. Furthermore, he looks stronger and more athletic than in his last fight. Anyway, the American is pretty slow and ponderous in his work, and throws a lazy left jab that can be easily countered with a strong right hand. He can can take a hit and try the counter-attack, but against such a mighty opponent as Joshua, he can’t afford to take so many. If Molina loses his composure and drops his guard after a bit of time on the back foot – as he did against Wilder – then this could be a very short fight. 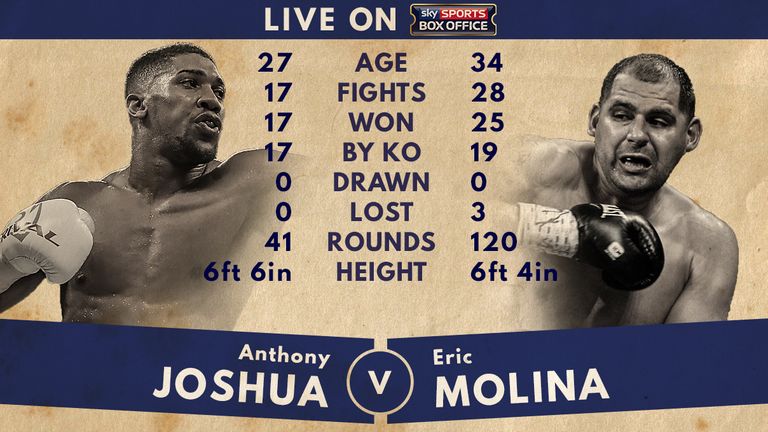