England travel to the Republic of Ireland for the first time in 20 years for a clash at the Aviva Stadium that will be more than a simple International Friendly. Don't miss our Rep. of Ireland v England match preview with betting tips, predictions, best odds, probable lineups, free bets & no deposit bonuses!

Maritn O'Neill is likely to play a whole host of fringe players with Daryl Murphy and David McGoldrick expected to be given their chance to impress. Former favourite Stephen Ward is back in contention while Paul McShane continues to recover from a gash on his leg. In midfield, Aiden McGeady and Wes Hoolanhan could flank Glen Whelan and James McCarthy to form the midfield line of four while Jon Walters and Robbie Keane will lead the attack. 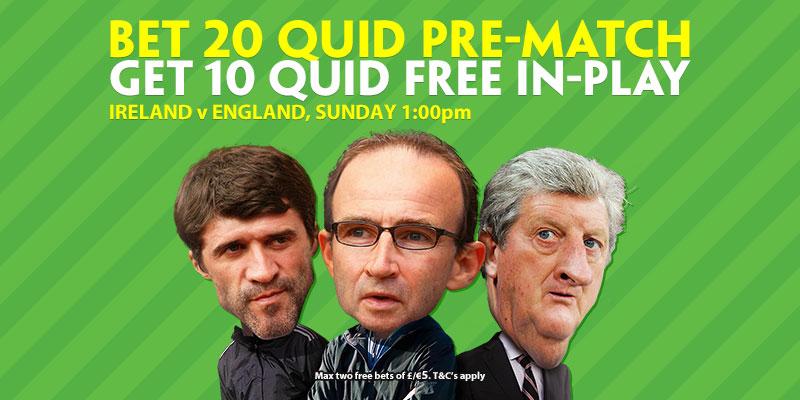 England have one foot in Euro 2016 after winning all five of their opening five qualifiers. They have scored 15 goals in five Group E fixtures so far and conceded a solitary goal at home to Slovenia. Roy Hodgson's men are unbeaten since their disappointing World Cup campaign last summer, winning seven and drawing one of their eight games.

England will be heading to Slovenia next week for their qualifying match and Hodgson will rotate his players. Fabian Delph missed Thursday’s England training session but he is expected to be fit. iverpool midfielder Adam Lallana was the only other absentee from training. The uncapped Jamie Vardy, Tom Heaton and Charlie Austin included in a squad but they are all unlikely to start. Harry Kane is not available as he prepares for the European Under-21 Championship in the Czech Republic while Tom Cleverley has been brought into the squad to replace the injured Ryan Mason.

The last four matches between these two have ended in stalemates. The two sides met in 2013 at Wembley when they drew 1-1 as Frank Lampard’s strike cancelled out Shane Long’s opener. England have won only one of their last 6 friendly matches played outside of England (D4 L1).