The first of the matches in Round 2 of the Six Nations 2016 takes place in Paris on Saturday when France host Ireland for an epic clash. This article contains our FRANCE v IRELAND betting preview, with expert tips and predictions, lineups, enhanced odds and no deposit bonuses.

Ireland had to settle for a 16-16 draw against Wales in Dublin in round one. They were 13 points in front at one stage but the deficit was cut to 13-10 by the half time break. Wales looked on course to complete a stunning comeback when a penalty gave them a 16-13 lead but Jonathan Sexton slotted over a late penalty to square it up.

Rob Kearney came through training on Thursday morning and will start the round 2 match at full-back, with his younger brother Dave Kearney slotting in on the left wing. Jonathan Sexton and Andrew Trimble have been named to start after passing fitness tests. Sean O'Brien's recovery from a hamstring injury will see Tommy O'Donnell move to the replacements while the centre partnership of Jared Payne and Robbie Henshaw remains in place. 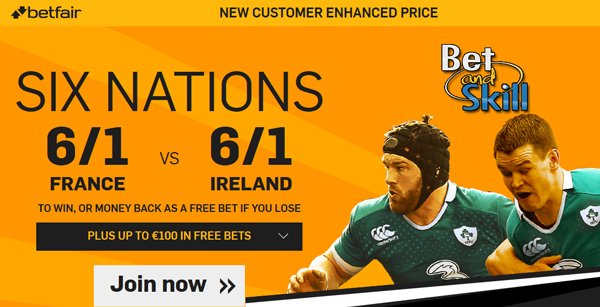 France were quite disappointing in their winning start last weekend when they narrowly defeated Italy 23-21 in Paris. The French found themselves 18-10 down midway through the second half but managed to sneak an opening wim. It certainly wasn’t the confident performance that the French would have liked to have put under new head coach Guy Noves.

The new coach has made six changes to his team. Teddy Thomas will start on the wing with Hugo Bonneval having to settle for a place on the bench. Louis Picamoles and Gael Fickou are injured and will be replaced by Yacouba Camara and Damien Chouly. Alexandre Flanquart has been named in the second row in place of Paul Jedrasiak. The other changes will see Jefferson Poirot and Uini Atonio getting a starting berth with Eddy Ben Arous and Rabah Slimani making way.

Ireland have won and drawn their last two visits to the Stade de France and are currently on a three game winning streak against Les Blues. When they last met at the World Cup back in October, Ireland beat France 24-9.