England start their Euro 2016 tournament against Russia at the Stade Vélodrome in Marseille on Saturday evening. This article contains our England v Russia betting preview with predictions, expert tips, enhanced odds, probable line-ups, bookie offers and no deposit bonuses on this game.

England breezed through qualification with a flawless record of 10 wins from 10, scoring 31 goals and conceding just three. They have also beaten tournament favourites (and hosts) France and World Champions Germany in the last seven months. In the most recent friendly, the Three Lions beat Portugal 1-0, though their performance left a lot to be desired. Prior to that they posted back to back victories over Australia and Turkey, winning each of those by a one-goal margin ahead of the meeting with Russia.

Ryan Bertrand is likely to miss the match after failing to recover a knock that ruled him out against Portugal. Danny Rose set to deputise at left-back, while Chris Smalling is a doubt. Roy Hodgson is expected to deploy a 4-2-3-1 formation with Wayne Rooney as numer ten, Harry Kane as central striker, Adam Lallana and Raheem Sterling on the flanks. Jamie Vardy could  play at some stage during the second half. 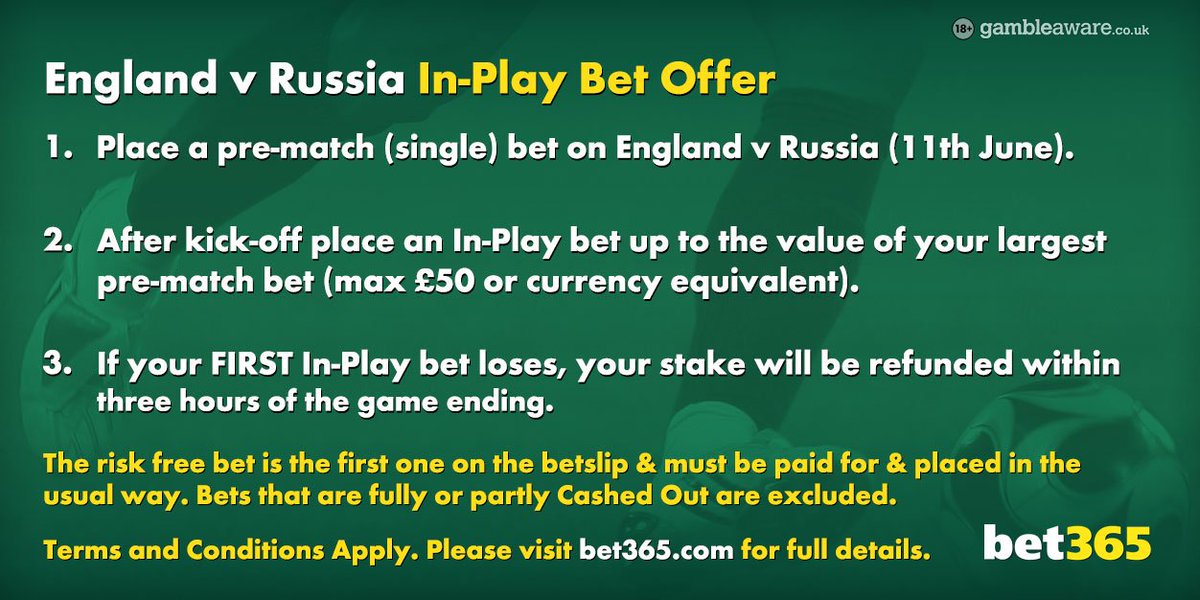 Russia finished 2nd in Group G to qualify behind Austria and were comfortably beaten both times by the Austrians. They began qualification under the stewardship of Fabio Capello but after his men won just two of their first six group games, the Italian was gone and replaced by Leonid Slutsky who helped the team to gain automatic qualification with maximum points in their last four matches. Russia haven’t won in any of their last three friendlies, losing two and drawing in their final warm up game against Serbia.

After Alan Dzagoev has been ruled out of the tournament through injury, Igor Denisov was forced to pull out of the Russia squad on Tuesday and this will be a major blow for Slutsky's men. Roman Neustadter is in line to shield the defence while Feder Smolov and Aleksandr Kokorin are expected to flank Artem Dzyuba up front. Veteran central defensive duo of Sergey Ignashevich and Vasili Berezutski are likely to start.