Defending champions Sevilla take on Dnipro in the Europa League final in Warsaw on May 27th. Who will lift the Europa League trophy? This article contains our DNIPRO v SEVILLA betting preview with odds, probable lineups, best tips, predictions, bookie offer and no deposit free bet.

Dnipro have been the surprise package of this year's Europa League. They were the underdogs for their semi final meeting with Napoli but they recorded a 1-1 draw away in Naples and a 1-0 home win in the return match. Since the semi final win Dnipro have played two domestic matches, losing a Ukrainian Premier League fixture 1-0 at home to Dynamo Kyiv and they bowed out of the Ukrainian Cup 2-1 on aggregate after drawing the second leg with Shakhtar 1-1 away from home. They sit third in the Ukrainian Premier League, nine points behind Dynamo Kiev, having collected 53 points from their 25 games.

Dnipro boss Myron Markevych rung the changes for his team's league game at the weekend, but is expected to recall a number of familiar faces for this one. Roman Zozulya and Sergiy Kravcjenko will both miss the final injury while Evgeniy Shakov is a doubt and will be assessed closer to kick off. Nikola Kalinic will be pushing for inclusion in attack, but the striking role is expected to go to Yevhen Seleznyov. 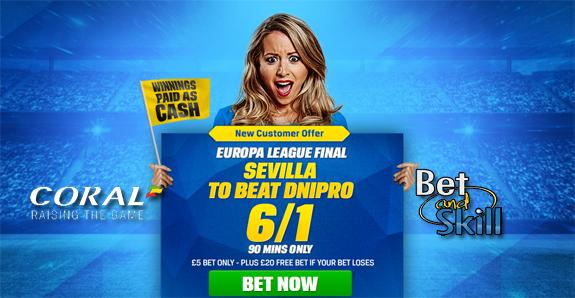 Sevilla is right back where they were a year ago when they won the competition by defeating Benfica in a dramatic penalty shootout. Domestically, they missed out on Champions League qualification as they finished fifth in La Liga, one point off Valencia and just two points behind last season's Spanish champions Atletico Madrid. The Andalusians recorded 23 wins from 38 league games and their goals tally of 71 was only bettered by Barcelona and Real Madrid. Their form has been impressive, having lost just one of their last 21 games in all competitions.

The Spanish club have a doubt over Dani Parejo while Beto is sidelined through injury. Stephane Mbia and Grzegorz Krychowiak should form the base of the midfield while Aleix Vidal will play in a forward position behind the lone striker Carlos Bacca.

Unai Emery's team have incredibly lost just once in the competition this term and are unbeaten in four meetings with Ukrainian opposition – recording three wins in the process. Dnipro have not lost in their last four away games in this competition and their solidity at the back has been lauded in recent months.

Get 5/1 Sevilla to win the match or get your money back!

€5 free - no deposit needed (UK customers not accepted yet)