The Play-Off Semi-Finals went largely as expected with Brentford and Fulham knocking out Welsh opposition to secure a place in the Championship Play-Off Final.

While we don’t have the sunny May bank holiday in front of 90,000 fans, it’s a trip to Wembley and the stakes are just as high with one place in the Premier League up for grabs.

Ith it all on the line, we take a look at all the best odds currently being offered for the most lucrative game in football...

When is Brentford vs Fulham?

The Play-Off Final will as usual take place at Wembley, although will be played behind closed doors. The game will be played on Tuesday August 4, 2020 with a kick off time of 7.45pm.

As usual, if the game finishes a draw after 90 minutes, extra time and penalties will decide the tie.

Who Is Favourite to Win the Play-Off Final?

Brentford, who finished third in the Championship have been favourite to secure promotion to the top flight since the season closed and were superb as they came from behind to beat Swansea in the second leg just a few days ago.

The Bees are 11/10 to win in 90 minutes with BetVictor, with Scott Parker’s Fulham being priced at 5/2 to get the job done inside normal time.

It’s a battle of excellent frontmen in this one, so a Match Result and BTTS bet would perhaps be the most sensible market to look at, with Brentford priced nicely at 10/3 with Paddy Power and Fulham at 6/1.

Brentford have had the better of Fulham twice this season already, and the Cottagers are yet to score against them. Just a few weeks ago Thomas Frank’s men were excellent in a 2-0 victory at Craven Cottage, with two late goals from Said Benrahma and Emiliano Marcondes enough to take the three points.

2-0 to Brentford can be backed at 17/2 with Paddy Power, and we expect another close encounter which could be turned on its head at any point.

Earlier in the season Brentford came away 1-0 winners at Griffin Park, and Scott Parker will be determined to make the final game of the trilogy, the one that really matters, go the way of Fulham. 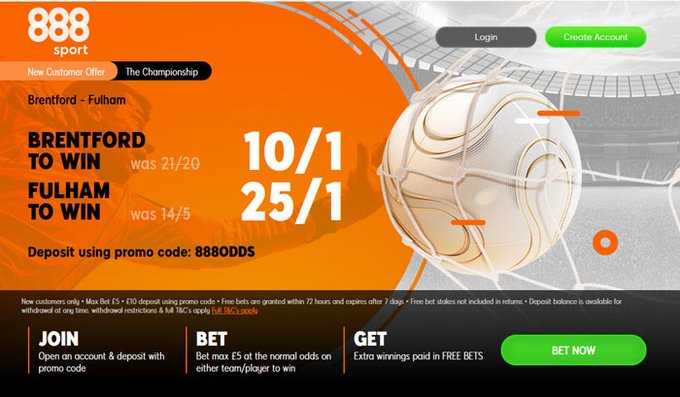 Our Brentford vs Fulham Predictions

It’s going to be an incredibly close game at Wembley, with both sides perhaps deserving of a place in the Premier League after the seasons they’ve had.

Brentford have looked superb since the restart and that victory over Fulham really set a precedent at what they can do to get over the line. We expect them to do that once again, with the potency of Ollie Watkins and Benrahma being instrumental in that. They’ll be two names well worth looking at in the goalscorer markets, alongside Aleksandar Mitrovic, who is joint top scorer in the league with Watkins on 26 goals.

You expect whoever finishes top of that pile is the player who has just fired their team to the Premier League.

For us, we expect goals at both ends in this one. It’ll be tense, tight but a game full of quality. Our backing goes with Brentford though and BTTS at 10/3 with Paddy Power, as the club look set to reach the Premier League for the very first time.

QuinnBet No Deposit Free Bets
UK customers get £1 no deposit free bet + 50% money back
Irish customers get €10 no deposit bonus for sport betting & casino
SHARE IT WITH YOUR FRIENDS
Let your friends know about this article! Share it on your favourite social media!