James DeGale will aim to unify the IBF and WBC super-middleweight titles when he faces Badou Jack in Brooklyn on Saturday night. This article contains our JamesDeGale v Badou Jack betting preview, with free predictions, tips, best odds, bookie bonuses and no deposit free bets on the fight!

James De Gale has 23 victories and only one defeat, and 14 of those wins were by knock-out. He picked up the vacant IBF strap courtesy of a points decision over Andre Dirrell. DeGale’s first defence of his IBF title was against Lucian Bute, a tough challenge that the Brit won by unanimous decision. His last fight was another labouring affair as the 30-year-old Londoner beat Rogelio Medina by UD in April 2016 after he was in control for the 12 rounds.

DeGale is a slick counter puncher with above-average defensive instincts. His southpaw stance and awkward style make him a nightmare for his opponents, and his ability to throw punches from all sorts of angles will test the ordinarily tight-knit defence of his rival. Anyway, he doesn't have the quickest hands. Furthermore, he has tended to go missing in the latter rounds of his recent bouts and has often been guilty of losing focus and momentum.

Badou Jack has a career record 20 wins (12 KOs), 2 draws and 1 defeat. He won his first world title a month before DeGale achieved the same feat and and since then the Swedish-born 33-year-old has gone on to make two defences, beating George Groves on a split-decision and holding onto the bling when getting a majority draw with Lucian Bute, who subsequently tested positive for a banned substance. In that fight, Jack controlled most of the early action, but he appeared to tire in the latter rounds.

Badou Jack possesses just the sort of persistence and accuracy that could sway the judges in his favour. He usually applies constant pressure and pounds the body to wear down the man who opposes him.  Jack "the Ripper" is a solid fighter who has probably peaked. Anyway, he has been the underdog in many of his contests, but that hasn’t stopped him from winning and retaining his super-middleweight title. 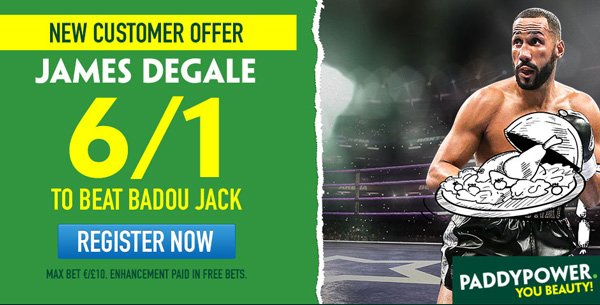