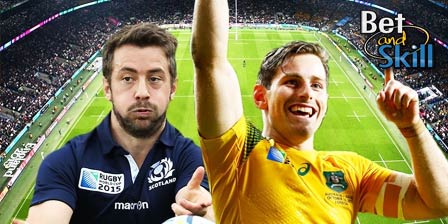 Scotland face their toughest test at the Rugby World Cup on Sunday when they take on Australia in the quarter-finals. This article contains our AUSTRALIA v SCOTLAND betting preview with predictions, expert tips, enhanced odds, starting XVs, free bets and no deposit bonuses on the match!

AUSTRALIA v SCOTLAND BETTING PREVIEW Australia have enjoyed a strong start to the World Cup as they topped the pool of death without losing a single match. The Wallabies recorded two of their four wins at Twickenham where they beat England and Wales. Their only loss of 2015 is a defeat to New Zealand at Eden Park in the Rugby Championship.

Wallabies coach Michael Cheika is without the services of full-back Israel Folau and number eight David Pocock with calf and ankle problems respectively. They pair will be replaced by Kurtley Beale and Ben McCalman. Lock Rob Simmons, who impressed against the Welsh, has taken Dean Mumm’s spot in the run-on side.

Scotland qualified for the knock-out stages of the 2015 Rugby World Cup by finishing second in Pool B with their only defeat coming against group winners South Africa. The Scots’ recent outing saw them winning a tight match against Samoa.

Scots coach Vern Cotter has opted to make four changes to the team that defeated Samoa 36-33 in their final group game last weekend. Their task this weekend has been made harder by the suspensions to forwards Ross Ford and Jonny Gray. Fraser Brown and Tim Swinson  will replace the banned duo. Peter Horne is back at inside centre with Matt Scott making way and Blair Cowan starts at flanker in place of Ryan Wilson.

Scotland have two of the last three clashes against Australia including a shock 9-6 win over the Wallabies at Newcastle in 2012. The Wallabies lead the overall head-to-head 19-9 and won the most recent clash between the two after a 21-15 win at Edinburgh, Scotland in 2013.